Exploitation of family members for one's political agenda is actually quite common these days. Images of children pleading for sympathy are quite powerful and politicians as well as their supporters tend to thrust theirs to the forefront if they feel that it could get them some extra support. 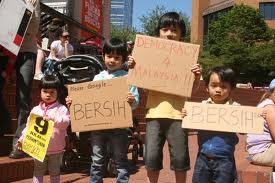 Back in 1998, at the height of the Reformasi movement, there was a picture of Nurul Nuha Anwar emerging from the sunroof of an MPV outside the courthouse where her father was charged for abusing his power. She was wearing all sorts of Reformasi paraphernalia and defiantly punching the air in apparent support of her father. That image, of a young girl (Nurul Nuha was only 14 at that time) fighting for her father stuck in my mind till this day. I tried to find that picture for this posting but it was nowhere to be found.
Images of Wan Azizah and her children at the courthouse were equally touching. The victimized family of a man wrongly accussed in a political conspiracy. Thousands, who had never even met Anwar Ibrahim nor cared about his politics must had sympathized with him just due to those images. All the stories of how he was wronged pulled further at the heart strings.
The following 1999 general election was a near disaster for BN. Only 37 per cent of Malay voters actually voted for BN. BN was only saved by the non-Malay voters who seems unimpressed by the riots and disturbances caused by the mostly Malay Reformasi supporters. DAP was in fact almost wiped out at that time.
It was however noted that at that time, family members of politicians being at the forefront in the battle for heart and mind of the people did not seems to draw much flak from the opposing side. It was as if its the natural thing to have your young children canvassing support for their parents. Nurul Nuha's more famous and pretty sister Nurul Izzah was at that time 18 or 19 and not yet a politician, yet she was given the political title of "Puteri Reformasi" by her father's supporters. I can't remember Dr Wan Azizah protesting that her daughter's innocence had been exploited. Fortunately, Nurul Izzah, was still at that time considered as a non-combatant by BN and mostly left in peace to finish her studies and later on get married  Only after that she became active in PKR.

Now, as for Guan Eng's son, I am sure he will come of age within a few years time and my bet is, he will follow in his father's and grandfather's political footsteps.
The recent outrage of him being accused of fondling his schoolmate's breasts was indeed unfortunate, but in the current political climate where mud slinging has become routine after the 2008 general election, he is to many, just a collateral casualty.
Nonetheless, if the Umno bloggers could be accused of pushing him into the mud, his own father is equally guilty of dragging him through the gutter.
Questions still hang on why Guan Eng was slow to take action on the matter. Why he kept mum when questions about the issue was first asked to him by Malaysiakini? Why he had instead dared Umno to attack his son in the newspapers? It's like telling Umno - "Here, if you dare. Shoot my son". What kind of father is he anyway to put his son on the firing line like that?
Only after about 24 hours, that he denied the accusation of his son molesting the girl in Malaysian Insider. The accusation of him bribing the family of the girl to keep them quiet was however conveniently left out. My reading was that, within that period, Guan Eng and DAP were busy accessing the situation to see what could be gained from the issue. The denial came only after it had been established that they could actually exploit the issue to win the sympathy of the public.
As far as I am concerned, Guan Eng's expressed anger over the matter was more political than actually personal. If it is the anger of a father whose son was wronged by his enemies, the reaction would have been different. Knowing Guan Eng, he would had lodged a police report and demand blood. Instead, his reaction is more towards pleading for sympathy from the public and attacking his political enemies. Why he did not lodge a police report is still a mystery to me.The one lodged yesterday against KJ was by Karpal, on behalf of DAP. Why not by Guan Eng himself?
In the following cries of indignation by Pakatan supporters, much were forgotten about how they themselves had maligned household members of BN leaders. Their exploitation of their own family members were also forgotten. Such were the hypocrisy of their politics that I believe they will lose support of people, who like me, at the height of Reformasi were taken in by those images of Nurul Nuha, her mother and siblings outside the courthouse. 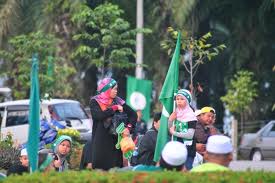 0
Auntie, why la you used your children for politics like this.

But some people are much smarter, they instead let other people's family members do the dirty work for them. 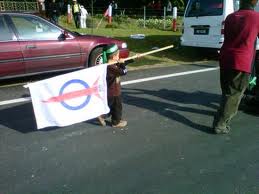 Guan Eng, the above is not gutter politics ka?
Posted by BIGCAT at 12:57