Yup, the spoilt brat was in Johor last night. But this time he did not dare to badmouth Johor - he just get one of his cute pet pigs from Pas to do it.

This particular pet pig of Guan Eng goes by the name of Suhaizan Kaiat. He is the Johor Pas Youth head. He went on stage at the function and knowing Guan Eng was there, spoke about how Singaporeans are very disturbed by the safety situation in Johor. Suhaizan, who is known for his penchant of taunting the police in his speeches parroted the Guan Eng's slur against Johor which got even the Johor Sultan offended.

I am not sure if this Suhaizan is just plain stupid or simply talk without any substance just to get some mileage from Guan Eng and the DAP crowd. Maybe somebody should make this fella sit at the CIQ checkpoint of the Causeway and force him to count how many Singapore-registered cars pass by to Johor in a single day. If Singaporeans are so scared of coming to Johor, then they don't come la. Simple as that. But as usual, Pas people are not so bright, and they will do anything to win the Chinese votes via DAP - even to the point of them having to kiss Guan Eng's butt.

Another Pas personality at the function was Normala Sudirman, who lost in the Tenang by-election, partly due to her husband's false MC claims and her lack of education. The Johor Pas muslimat deputy head probably learn a thing or two about currying favour from the DAP and told Suhaizan to toe the line. More than half of the votes she got at the by-election came from DAP supporters.

My suspicion of these two high ranking Johor Pas officials being mere DAP pet pigs was confirmed when Guan Eng in his speech vowed to the mostly Chinese crowd that DAP will make sure that hudud will never be implemented  in this country. Suhaizan and Normala just sat there and did not say anything. I guess, as far as Pas people in Johor are concerned, they rather have Guan Eng as their Mursydul Am instead of Nik Aziz. After all Guan Eng probably can get them more votes in Johor compared to Nik Aziz and his hudud dream as what happened in Tenang.

Oh ya, before I forgot, is it not Nik Aziz who said that Guan Eng is akin to the legendary Islamic caliph - Khalifah Umar Abdul Aziz....hmmm, no wonder lah. 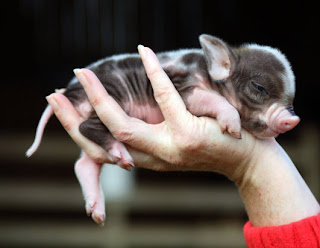