Yup, the evil BN police had stopped these sorts of things - 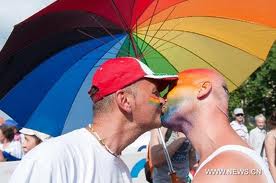 This one just in - via NST alert :
NST 03/11 : Police issue outright ban against all activities & events organised by Sexuality Merdeka

Then again, if Ambiga ( who was supposed to launch the event) decide to have a mass protest against the ban like she did for Bersih 2.0, I wonder what Pas will do. After all, Sexuality Merdeka is also about freedom what, and the last time Ambiga talked about freedom, Pas immediately jumped on the bandwagon.

Well probably not this time, as all should realize by now, Pas will only support all these freedom movement things if they can gain some political mileage.

Now, the ball should be in PKR's and DAP's court. Will they actually now condemned the police ban and defend the rights and freedom of the homosexuals, bisexuals and other sexuals?

Afterall,  these people are also Malaysians too and according to Ambiga and the gang, they have the right to have sex with whomever and in whatever style they prefer. This is also according to them a fight for freedom which the Pakatan people so cherished in their fight against the evil BN and Umno barbarians.
Posted by BIGCAT at 17:42