Yesterday, a very pretty DAP supporter called me and told me that she had just came back from Penang and was so impressed by the cleanliness and the upgrading works being done in the old part of the city. 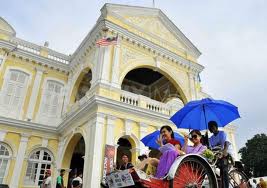 She said she had done some research and found out that the entity responsible for it all is the Think City.

"Big Cat, you must write something about the good works of these people. Otherwise Lim Guan Eng will claim credit for it all for himself,": she said with a giggle.

Well, for that coming from a DAP supporter is really something. Apparently not all DAP supporters are ugly chauvinists ya. I even trust this girl with my identity despite her being a bit in love with Guan Eng not too long ago.

Guess she had read this -


Nonetheless, I have to admit that I know nuts about Penang. The last time I went there was about 12 years ago. So, I will not write too much about the place for fear of misrepresenting it.

These, however comes from the Think City people :

- What is Think City’s primary objective?
Our goal is to implement and administer the George Town Grants Programme with impartiality, non-exclusivity and transparency. Our primary objectives are to:
Kick-start the urban rejuvenation of the George Town World Heritage Site (WHS)
Build on the momentum of the civil society and private sector initiatives – spurring private-public partnerships
Capacity building and capability development for the protection and development of the living heritage, culture and architecture
Encouraging a sustainable, livable environment

- Who does Think City report on its projects and progress?
Think City will be reporting to its Board on project updates, which are generated by grantees. Nevertheless, we will be working closely with all State Govt., Majlis Perbandaran Pulau Pinang (“MPPP”), Jabatan Perancang Bandar & Daerah Penang (“JPBDP”), the Heritage Commission and with the local community - the drivers of this project - throughout the tenure of this Grant. Progress report of all GTGP projects will be publicly available on Think City’s website.

- Does the state govt. sit on the Board of Think City?
At this moment, Think City's Board of Directors constitutes Khazanah’s appointees. There is no direct representation from the federal or state government.
Think City will remain apolitical as this is the most efficient way forward, given the circumstances in Penang. Nonetheless, there will be state government appointees on our Advisory Panel to provide critical comments on projects which will require their expert opinion.

The rest you can read at their website at www.thinkcity.com.my.

MEANWHILE, I tried to google for news about similar project for Malacca which was also given the World Heritage Site status by Unesco.

The Malacca state government was given a direct RM30 million grant to carry out  similar project as the one in Penang being done by Think City which received RM25 million.

The latest news I found was this -

MELAKA, June 9 (Bernama) -- The Melaka government has asked the Economic Planning Unit (EPU) and National Heritage Department to pay out the remaining funds from the World Heritage Site Fund, amounting to RM30 million, which was promised to the state.
Chief Minister Datuk Seri Mohd Ali Rustam said the state government had so far received RM3.4 million, of which RM2.2 million was allocated to the Melaka Historic City Council and RM1.2 million to the Melaka Museum Corporation.
"I appeal to the National Heritage Department and EPU to give us the money, not only for Melaka but also for the country, because without it many interrelated programmes cannot be executed," he told reporters after launching a seminar in conjuction with the Melaka River Festival 2011, here today.

Well, then again, my research may not be so tip top. So, anyone from Malacca who got more news on the Federal government's RM30 million grant for Malaccan world heritage site, please enlighten me ya? 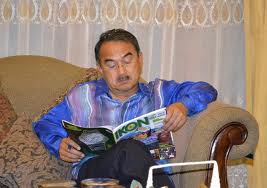 Must defend your Chief Minister a bit la. Must show that Ali Rustam is tip top ya.
Posted by BIGCAT at 12:42