I had previously posted here
Fortress Johor - Part 1 : A new MB? about what many believed to be the impending retirement of Johor MB Datuk Abdul Ghani Othman after the next general election.

In that posting, I had listed four main contenders who are vying for Ghani's post.

Ever since that posting, I had heard murmurs of dissapointment among some people who think that I should had also included people like Hasni Mohammad and Dr Adham Baba.

Well, to satisfy their curiosity - I do not think the duo have much chance to take over from Ghani because they currently belong to the wrong Umno camps. Hasni may still have a chance if he can wait for another term but Adham is simply out of the race.

Actually, the four who made it to the list are also there by long shots as my sources in Putrajaya indicated that the sane Umno minds there still prefer Ghani to stay as MB for another term.

These federal Umno leaders who want Ghani to put aside his retirement plans feels that Johor will be in great danger if the wrong person takes over the MB post.

They are of the opinion that Ghani is the only one who have the gut to say "NO" to anyone in Johor or at least make a decent trade off if necessary..

If Ghani really goes after the election, they are quite confident things will no longer be the same for Umno or BN in Johor.

Nonetheless, the jockeying for the Johor MB post continues with two more names emerging of late.

The first one is RAZALI IBRAHIM, who is the deputy youths and sports minister, Umno youth deputy chief and Muar MP. 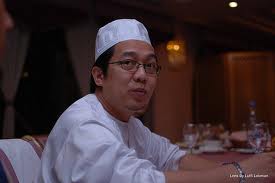 I was not surprised when a reliable source told me about Razali's name being aggressively bandied by his young aides as a potential MB.

I got no problem with Razali as he seems nice as a person, well educated and have great potentials. However, in my opinion, he still need some more experience and do more to develop his stature if he is to run Johor. For one, I do not think at the moment he is capable of handling the fiercesome Umno warlords.

I sincerely thinks that Razali will make a good Johor MB one day, but not for at least another term. He need to be seen as not being a young man in a hurry.

Another crucial thing he need to do is to advise his very aggressive young aides to cool off. Otherwise, they can seriously damage his future.

Meanwhile, the second name which just emerged recently is a real shocker.

Those who knows Johor Umno politics may think I have gone mad or something for naming this guy as a potential MB,

but I got this info from a really credible source.

The guy is OSMAN SAPIAN, the Kempas assemblyman.

Yup, unbelievable but true. Osman is in the running too.

He is seen in this picture with his "good friend" and boss in the Pulai division Nur Jazlan Mohamed  (who is also a MB candidate). 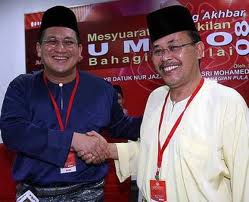 Don't ask me who are the backers of Osman Sapian as I am not at liberty to tell, but he is now considered as among the top three among the candidates.


Meanwhile Datuk Ghani, and his small band of loyalists are in Segamat today, checking the kawasan-kawasan peti undi in preparation for the coming general election.

They seems oblivious to all these talks about a new Johor MB.

"Engko jangan kacau aku lah," a Ghani's aide said to me when I called him in Segamat to ask about Osman Sapian this morning.


(Reminder: Dear readers, please be careful about being seditious ya.)
Posted by BIGCAT at 15:00