Jui Meng the frog shouldn't get over excited

For many years I had witnessed how the opposition seems always been confident of doing well based on the number of people who turned up at their ceramah.

True enough, opposition's gathering were well attended most of the time. Petty traders could even set-up stalls nearby and made roaring business if the merchandise is right.

Yet, time and again they get trounced by BN at the polls. That was until 2008 when there was a groundswell of discontent against the Pak Lah's administration.

So, what was it with the number of people at political gatherings? Why was it not the true reflection of support by the people?

My answer to this -
1. It's the same bunch of people who turned up over and over again at different locations of the opposition ceramah.
2. The crowd consists of people who have nothing better to do and can't afford proper entertainment.

This is particularly true with Malays.

The Chinese would on the other hand only come in droves if there is something to be properly gained from such event.

Ok, I just read an article by Chua Jui Meng, the Chinese political frog who is now heading Johor PKR about how proud he was with the 30,000 crowd at a Pakatan ceramah in Parit Raja, Batu Pahat on Dec 1.

The crowd, whom he described as being mostly Malays were said to be willing to sit in the muddy field in front of the stage and listen with great attention to the likes of himself, Hadi Awang and Anwar Ibrahim. Errr...DAP only send their Mr Bean, Tan Seng Giaw. Johor opposition chief Boo Cheng Hau was also conspicuously missing.

Well Jui Meng, last time when you was in MCA (become minister some more), of course you can't get that amount of audience. But don't get so excited, over it, ok? Those people you saw that night were mostly fanatical Pas supporters who came from all over the place in Johor, some came all the way from Mersing. They believe that by supporting Pas, they will have easier passage to paradise. So lepaking in a muddy field like buffaloes while listening to conmen like you was nothing to them, ok?

Ya, there were some locals of Parit Raja too, but they were there for the entertainment value lah. If I was in Parit Raja that night, I would probably popped by too, to check out what bullshit Anwar and the gang are selling. Quite fun also what.

Now, these sorts of nonsense would not happened in a Chinese area. You ask them to sit on the muddy field while listening to your dribble and the likelihood is that they will throw the mud at you.

Chinese are not stupid. It's as simple as that.

You want them to listen to you, make sure you had prepared a proper place for them. That's why whenever Jui Meng and his patron saint Anwar Ibrahim went down to JB, they would gather with the Chinese supporters either at a huge Chinese restaurant or in front of the Sutera Mall. 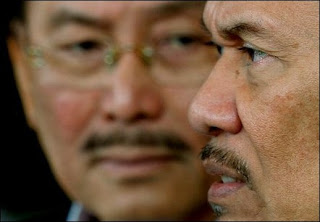 Must have a little makan first, ok?

That was the difference between Chinese and Malay supporters of Pakatan.
Posted by BIGCAT at 13:48