The so-called peaceful protest in KL (additional videos and pictures) 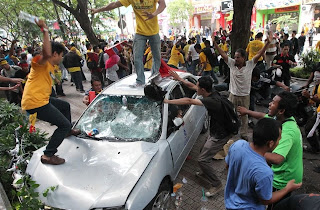 This is a sad day indeed....you all watch this and judge for yourself.


My prayers are now for the seriously injured policemen at the HKL ICU and their family.


They even hit the policeman on the driver seat after he can't move any more.

And in case anyone still dispute that the rioters did not injure any policemen, watch this -


Upon a request by a pro-riot commenter, here is the picture of the policeman who drove the mobbed police car as he was dragged away by his "rescuers". Note that the "rescuer" in the yellow t-shirt has his hand on his throat - 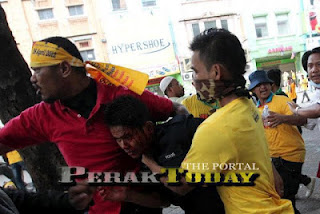 And for bonus, this is the picture of Mohamad Azri Salleh, the guy wearing the halmet who tried to help the injured policeman in the car but was beaten up by the rioters. He is a cameraman of TV Al Hijrah. 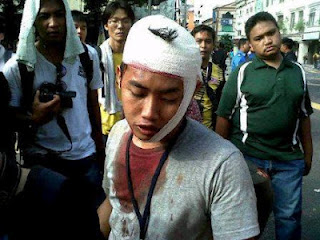