Valentine and a beautiful Chinese story

Today is Valentine Day, but I do not celebrate it.

However, someone in the office received a beautiful bouquet of roses, which made me feeling a bit nostalgic. It has been many years since anyone gave me flowers....

For no good reason, it reminds me of my favorite Chinese movie ever. 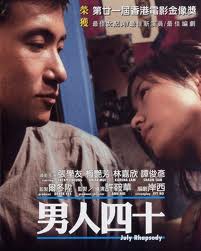 It is the last movie of Anita Mui. She died of cancer not long after making this movie. Will always miss Miss Mui.

This is the trailer of that movie -


And this is its review by lovehkfilm.com -


Last onscreen in 1995's High Risk, Jacky Cheung finally breaks his big screen embargo with a fitting project: Ann Hui's drama July Rhapsody. Bearing a literal Chinese title of Man Forty, the film operates as a bit of a companion piece to Hui's award-winning 1995 drama Summer Snow (Chinese-titled Woman Forty). Both are films that explore fragile family dynamics and both feature protagonists with burgeoning mid-life crises.
Cheung is Lam, a high-school Chinese literature who's attracted by an intelligent, precocious student named Wu (newcomer Karena Lam). It's well-known that Wu has a thing for Lam, but he puts off the attraction for as long as he can. Meanwhile, his wife Ching (Anita Mui) reveals that their old high-school literature teacher (Tou Chung-Wah) has returned with cancer, and she wishes to take care of him. Lam is upset, but we don't know the reason just yet. By all appearances, his connection to his teacher was a good one. It isn't until Ching chimes in her take on the past that the relationships become clear - and the film really begins to come together.
Ann Hui has always been a storyteller first and a stylist second. That continues here, as she spends all her time telling the story of these believably real characters without explaining exactly what it all means. That opacity serves the film extremely well. We know something's wrong between Ching and Lam, and we know that Lam is slowly being tempted by his student, but the camera remains objective and unobtrusive. Our feelings for the characters arise from the actors and situations, and not from a heavy-handed script that makes sure to tell us what matters.
Screenwriter Ivy Ho previously wrote the Comrades, Almost a Love Story, but that film seems positively overbearing compared to the subtle, sure rhythms of July Rhapsody. There is a bit of existentialism that occurs, but none of it seems out of place. After all, this is the story of a mid-life crisis, and a remarkably affecting one too. The characters are conflicted, flawed, and even petty, but above all they're decent and human.
Even more, the story's construction is extremely precise. Unfolding as a story from Lam to his son Ang (Shaun Tam), the film takes on a rather slow, placid feel. However, as details drop and the characters slowly act, we are drawn in more and more. By film's end, you want to know what choices will be made, and the uncertainty with which they're shown is affecting.
Despite the feeling that Lam may end up being unfaithful to his wife, his character never seems to be anything more than a good man. Jacky Cheung has chosen a fine role to return to the big screen. A naturally likable actor, he manages to downplay the "aw shucks" mannerisms that have typified his screen persona for so long. Lam is quiet and seemingly implacable, and Cheung manages to convey the necessary emotion beneath that facade.
The other actors fare just as well. Anita Mui's performance echoes Cheung in its subtle language, and newcomer Karena Lam is extremely real and beguiling. As Wu, she needs to appear innocent yet suitably mature to attract the character of Lam, and Karena Lam does the job extremely well. Handing her the award for Best New Artist at this year's Hong Kong Film Awards was a welcome decision, and hopefully she'll be able to live up to her initial promise.
However, the show is ultimately Ann Hui's, which is funny because she doesn't really make her presence known in any way. She respects the material and the characters and the result may her finest film in years. I actually haven't been too supportive of Hui in recent years. I found Eighteen Springs affecting but placid, Summer Snow overrated, and Ah Kam ill-advised. With July Rhapsody and Visible Secret, she's effectively reinvented and strengthened her directorial career. Despite the narrative and stylistic skills of Johnnie To and Fruit Chan, Ann Hui may actually be Hong Kong's best storyteller. (Kozo 2002)
Posted by BIGCAT at 14:24