Well, Tok Nan seems to be a different kind of man than Johor MB Datuk Abdul Ghani Othman. He likes to be funny sometimes, even on serious issues.

Can't really blame the man. The Lynas demo was indeed funny - complete with a khalwat drama and everything.

I don't think if it's Ghani, he will even dignify the demo people with any comment, colourful or otherwise. All those khalwat elements would not interest him that much. He would instead let the demo people tire themselves by being stupid and continue with his work

We will probably see Ghani do exactly that now that the Pakatan gang are apparently planning to spark something similar to the Lynas thing in Johor.

The latest report that I got was that the Pakatan people are now laying the groundwork to do so in Pengerang, Kota Tinggi. 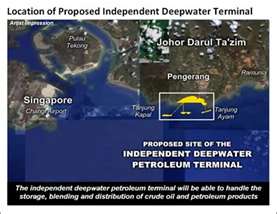 When I did this posting , A little pig oinking at our police , I was not sure where it was heading, except that it's the usual Pakatan's police bashing exercise. Only later on that I realise it's a start of a new campaign to undermine the BN government, especially in Johor.

On Friday last week, it was discovered that the Pakatan people had recruited 18 locals of Pengerang to be agents tasked with instigating the residents of Pengerang to protest against the planned Petronas RAPID pateroleum hub project. The project was expected to involve an investment of up to RM200 billion.

This Pakatan efforts is being helmed by PKR, Pas and of all people, the Johor Bar Council.

I don't know la how stupid the lawyers are, but this time they are clearly playing an open card by declaring that they are indeed pro-Pakatan.

What is also noticeable is unlike Lynas, the DAP this time is not among the Pakatan front liners on this particular issue. Quite smart of them. Pengerang is a Malay area, so, they just push their Malay balachis to do most of the dirty work. See. who said manipulation of racial sentiments is not a consideration among the Pakatan people?

I am not yet sure how they are going to angle their attack. It could be on environment or land matters. Either way, they will try to cook it up to be another national issue like Lynas.

Of course, just like Lynas, they can't stop the project but this is simply to stir up something. Johor has no real big issue, so this probably will do, so that they can have something to say during their ceramah or an excuse to initiate another publicity-attracting demo like the Lynas one. They know there is really nothing wrong with the project, but it's creating the negetive perception that matter to them.

They would never care that the RM200 billion investment of the project will generate economic growth of more than trillions of ringgit within 15 years.

They would never tell the villagers in Pengerang that by that time, their children will have lots of employment opportunities from the economic growth, and that their children would not have to go far from their hometown to get a good job.

These Pakatan people who wanted the Pengerang folks to protest against the project are almost entirely made up of outsiders. They never care that all these while, the place has been a Johor backwater, and that it is currently only famous for being the departing and arrival points of illegal immigrants via the so-called laluan tikus.

Do those people such as the suited up smarter than anyone else pricks from the Bar Cuncil really care about the mostly poor fishermen and farmers of Pengerang? I don't think so. They are just there to reap political benefit and use those whom they think could be manipulated for their ends.

The Pakatan people know they can't win in Pengerang as it is a BN stronghold, yet they will proceed trying to make an issue over the planned construction of the petroleum hub.

All that they want by creating the issue is not to protect the interests of the Pengerang folks but instead to have it to play with in projecting themselves as being people and environment friendly with the general election around the corner.