Got some free time today and poked my nose at the PWTC to see what the Umno people were doing.

There was indeed an air of serious excitement there. Everyone seems to be quite worked up as the assembly is going to be the last before the coming general election. Bear in mind that today was not yet the assembly proper. Just party president DS Najib Razak giving a close door briefing to the delegates and TS Muhyiddin Yassin opening the party wings meetings.

Security was however very tight and I have difficulty moving around the place. Passes with barcode were given out to the delegates, observers, journalists and even the stall operators. I happened to bump into a journalist friend and he started bitching about the rather unnecessary hassle.

"I don't know why they have to be so bloody strict. Umno is supposed to be friendly. This is definitely a case of "lebih sudu dari kuah"," he said, in reference to the rather stern looking security personnel guarding the entrance to the various halls. (Sorry ya, I don't know how to translate the Malay words properly. It's something like being over the top lah)

Well, being strict is okay, but I don't think they should be rude. I told my journalist friend that it's just a job hazard and he needs to be patient. At least they didn't set up metal detector machines at the entrance of the halls like in some party conventions in other parts of the world.

I managed to talk with some of the delegates who attended the Najib's briefing late in the afternoon. They told me that Najib had asked Umno members to be prepared for the coming electoral battle. He told them to be loyal and abide by the leadership's decision on who are going to be candidates in the GE13. They need to support them, instead of sabotaging the party for not getting their choice for electoral candidacy. Umno is nothing if it loses in the elections, he said.

Najib seems to keep drumming that message to Umno members. Probably, his biggest concern is that some Umno members are stupid enough to think that the party could still afford their selfish infighting nonsense at this very crucial juncture.

All that aside, a delegate from Putrajaya told me that Najib had mentioned about his recent meeting with leaders including US president Barak Obama at the Asean plus three summit in Cambodia.

Najib had said that Obama, who had just been reelected as US president at that time had insisted to have a picture with him before wishing him all the best for the coming GE13. 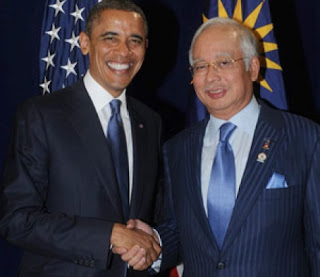 I don't think Najib meant to brag about how good he is that even the US president seems to endorse him as a Malaysian leader. Najib is not like Anwar, who always insists on how internationally handsome he was supposed to be.

What Najib actually conveyed by that story is that the world recognizes Malaysia's achievements and willingness to improve under its current leadership. Najib's transformation initiatives for the country seems to be the real reason for Obama's enthusiasm to be pally pally with him.

I don't think Obama would be that interested for the world to see him being so friendly with Najib if he believes in all those nonsense the Malaysian prime minister had been accused of by the Pakatan people.
Posted by BIGCAT at 21:38