There is this report I read in the pro-Pakatan Malaysian Insider about the anti-BN Irene Fernandez of Tenaganita saying that constitutional provisions which secure bumiputra rights are inspiring racial discrimination.

I believe she was talking about Article 89 and 153 of the Federal Constitution.

Well, I know that she is actually saying nothing new as those provisions have been targeted by all anti-BN (or to be exact, anti-Malays) quarters since before I was born. But it just bothered me that she brought up this issue as everyone were gearing up for the coming general election where it is known that campaigning along racial line will be the main weapon for certain quarters such as it was during the last Sarawak state election.

Okay, this is a very prickly issue and should be avoided if we want things to go smooth in this country. I even have recurring arguments with my boyfriend over those provisions whenever we accidentally strayed to race relations in our conversations. We normally avoid the topic as it does not do any good to argue about it.

But, whenever I'm forced to argue about it, my usual line on this matter is that, those provisions were agreed upon by our founding fathers (of all races) as a trade off whereby the non-bumiputra were given citizenship and allowed to continue with their way of life instead of being forced to assimilate into the bumiputra's culture as it was in other countries such as Indonesia, Thailand and the Philipines.

That is why, I would say that the Chinese, for instance, have their own education system which was guaranteed by the very same constitution which provides for the loathed bumiputra rights. That is why Malaysia is the only country, other than China and Taiwan which has a Chinese education system.

Well, maybe Irene Fernandez should check on those provisions of the constitution which secure the existence of Chinese schools and come out with a statement that those provisions cause the segregation of our children on racial line and inspire racial discrimination. See la what would happened if she ever say that.

Personally, I support the existence of Chinese schools because I respect the wisdom of the country's founding fathers whom I assume were of the opinion that each race should preserve their own identity while helping each other as we share this country. That was, to me why the constitution provides for such leeways exclusive to each particular race. The understanding should be that we respect each others' rights and honor the agreement made by our forefathers.

Let me put it on record here that I never believe in the concept of "Bangsa Malaysia" because there will never be such a thing. We are Malaysians of different bangsa and each should respect the others instead of trying to force an assimilation into one bangsa. The same as there is no such thing as "Bangsa USA". We were simply not meant to be that way.

Everything has a price, and to me, what were propagated by people like Irene Fernandez as constitutionalised racial discrimination, is actually the price we have to pay for the half century of progress of this blessed multi-racial and multi-religous country.

By the way, for being purportedly racially discriminated, I think the minorities in this country were actually doing much better economically, and now politically, than the bumiputra who supposedly were discriminating them, I think.

Not even Irene Fernandez seems to be too racially discriminated, isn't she? She seems to be doing rather well despite her persistent complaints about this country, I think.

Was you racially discriminated in anyway Irene?

Oh by the way, Irene, can you please do a make over a bit. Really la, at least make yourself a bit more presentable if you want to play act as human right heroine like Aung Sang Sukyi. 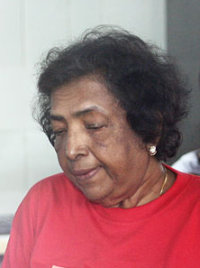