Possible solution to a hairy problem

You all probably have read the report about hair dressing saloon operators in Kota Baru having a hard time because the Pas Kelantan government had banned women from cutting men's hair and vice versa.

Those who have not yet read it can do so here -

Well, there you have it. So much for non-Muslims not being affected by Pas' hudud aspirations. And that's just the starter, ok. I'm sure more will come once Pakatan takes over Putrajaya.

Well, DAP will definitely fight Pas over such things but the fighting will go on and on for like forever and the country will suffer for it. How to work la if fighting all the time over such things.

Anyway, that's for the future. As for now, here is a solution I would suggest for the Kelantanese hair saloon operators - hire more hairdressers whose gender is somewhere in between...not men nor women. 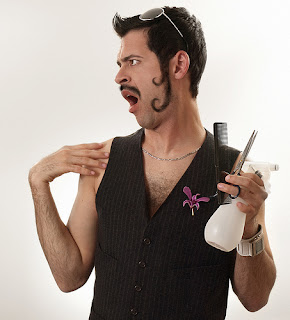 How's that? The LGBT gang should be happy about it, right?

Meanwhile, try to get Ambiga and her Bar council friends to cook up some legal hocus pocus claims so that those who choose not to be men or women got to get their gender registered with NRD as - Malaysian. Ya, the same thing which Hannah Yeoh so fashionably tried to do for her child's racial status.

That way the hair saloon operators could avoid being fined....err, also couples could also avoid getting caught for khalwat. Can always argue - See, I'm not a male or female, my IC stated here that my gender is Malaysian. And so does my partner's....Ok, I think I'm getting overboard with this....hahahahaha....this is actually so funny for me....except, of course for the very serious consequences it will brings upon our multi-racial society.
Posted by BIGCAT at 14:50