The Questions I Must Find Answers to

The one thing I have learned these past few days of "entertaining" visitors to this blog is that how exhausting it is trying to drum the same thing over and over again through thick skulls that seem to have been "sense-proofed" so well that I got bored with the repetitive denseness.

On the one hand we have the super blinkered various opposition cult members, and on the other is the Malay supremacist hell-bent on cleansing Malaysia of "foreign" DNA not deemed pure enough to be considered as part of the Malay ethnic group.

And I can't seem to get through to either.

It is so sad that we have reached a point where some of our citizens, whom I assume to  be young and have better educational opportunities than their parents, are so locked in their respective self-pity and imagined insults that they can't move forward in their thinking and attitude, and are ripe for exploitation by unscrupulous politicians.

Is it so wrong for a person to support the ideals of Umno and be a member of a party that was formed based on unity and solidarity of the children of the land, that more than 3 million Malaysian citizens are liberally labeled with the same brush?  Are the non-Umnos so pure and clean of wrongdoings?

Does it really matter if I am not a pure 100% Malay?  So what if I am a mongrel, with Javanese, Indian, Dutch and Chinese blood? 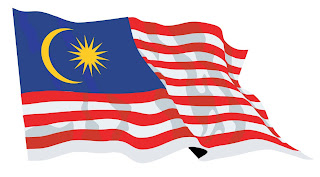 I am a Muslim and speak fluent Bahasa Melayu.  I love and practice the Malay culture. I even choreographed Malay dances when I was in boarding school and formed a traditional Malay dance troupe with other Malay girls while I was studying in the US.  I remember proudly performing in front of the mostly white audiences in the American red-neck Midwest, showing off our beautiful gamelan, the lively joget, and the intricate steps of zapin.  I even wore the baju kurung and kebaya in the dead of winter when I was working in London.   To this day, I hand-stitch my own baju kurung the traditional way.

And even if I am not a Malay, does it really matter?  Should I be kicked out of Malaysia for not having a drop of Malay blood or a trace of Malay DNA?  If I am not accepted in this blessed land for not being a 100% pure, DNA-wise, daughter of the land, despite my love for my country, my language, and my culture, pray tell me where should I give my heart and loyalty to?   Where do I belong?

I left my job in the UK the moment I got a job offer in Malaysia, not because it was better paying because it wasn't, but because I wanted to live here, tanah tumpah darah ku, and be with my people, to give my bit to its glory.  Was I wrong?