It is the standard operating procedure of Pakatan cybertroopers to divert an issue being discussed if they find themselves unable to win an argument.

If that fails, they would instead try to out-shout you by extolling the evilness of BN or Umno or police or  whatever else under the sun.

In the case of Saturday's riot in KL, they know they can't divert from the issue. People were so upset with the barbaric behaviour of the rioters that no matter how hard they try to divert the issue by telling people how expensive Rosmah's handbags were, the trick simply wouldn't work.

So, the next best thing was to try blaming everything on everyone else on the government's side. In this case, the primary target was the police.

Here is an example of a comment from my posting Punish them at the ballot box (and in court), by this blog's regular troll, a DAP cybertrooper who identify herself as Kluang girl.

Police in plainclothes throwing things and shouting Reformasi slogans to provoke the crowd. Also beating up innocent people recording violent police brutality acts with their camera-phones in front of bystanders...

Before you go into racial propaganda again, let's get out all the photos of the instigators out there for thorough investigations to identify all these planted police agent
provocateurs...I'm sue you'd love to know the truth too rite.

By the way, did your "man" tell you what happened on the ground?

I highlighted in bold the point she made about the need to identify the police elements within the rioters rank who instigated the violent conduct of the mob.

Ok lah, since she was so insistent about the presence of police agent provocateurs, let's see where they are in this sequence of pictures displaying the Pas' Unit Amal members leading a band of rioters in a rush against a police human chain in front of KLCC.
You see, members of Unit Amal who were supposed to be in charge of security for the "peaceful demonstration" were the ones in maroon t-shirts. They are known to be very disciplined and know each of their members. So, the possibility of them being infiltrated by agent provocateurs should be almost impossible.

Well, see for yourself lah here, who are charging who. 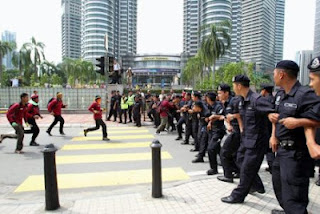 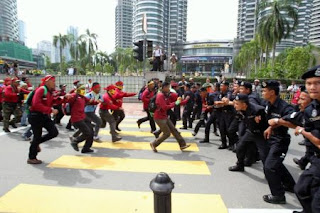 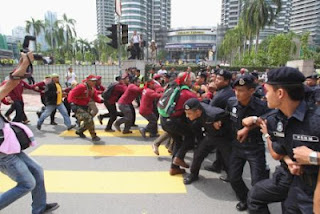 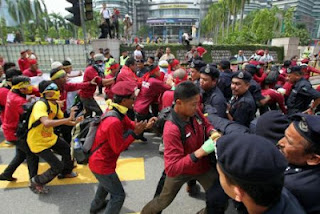 Funny really, normally in western countries its the protesters forming the human chain and riot police charging at them with batons, shields, etc. but here the "peaceful" protesters are the ones charging at the police, swearing, pushing and kicking.

And here is the video of this incident


As you may observe, the policemen, who were not in riot gear, purposely broke their human chain to avoid an altercation which would have happened if they had stood their ground. You can hear them telling each other, "biarkan, biarkan...."

Photos courtesy of THESTAR by AHMAD IZZRAFIQ ALIS
Posted by BIGCAT at 23:58