Nik Aziz is not the father of Guan Eng

Today there was a story about Pas' Nik Aziz planning to sue NST and former IGP Rahim Noor. It's about an NST article last week where Rahim was quoted as describing Nik Aziz as "bapak kafir" (father of infidels). Looks like Pas has learned from DAP's big brother PAP - sue your enemies to bankruptcy if you don't like what they say about you. 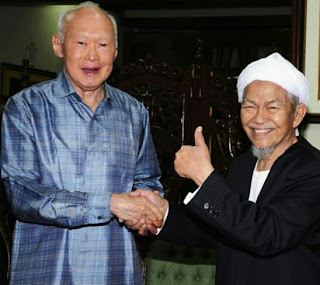 The problem here is that Lee Kwan Yew's PAP never called anyone kafir. And even if they did, I very much doubt they will sue the people whom they called kafir if those people returned the favour by calling them kafir too. PAP may be a lot of unpleasant things, but I think they do have some sense of shame. Ok lah, PAP probably would not mind people calling them kafir, but that's beside the point. The point is, you don't cry foul when people called you names which you yourself had used to describe others. It's like a kid who throw a stone at another kid only to run crying to his mommy after the other kid started to throw the same stone at him.The law may allow it, but this shows how low class Pas really are.

Remember Amanat Hadi? Pas actually lumped ALL Umno people as kafir back during that period in the 1980s. It's at the height of Pas' fanaticism. Pas members at that time actually avoid praying with Umno people in a surau or mosque. They even regarded meat of livestock slaughtered by Umno members as not halal because due to the Amanat Hadi, they were regarded as non-muslim.

Well, I don't know what got into Rahim Noor or the NST editor who allowed the story to be published, but personally, I think it was more of a political pun than anything libellous. Come on lah, who would really believe that Nik Aziz is the father of infidels. Everyone know what that Lim Kit Siang is the father of Lim Guan  Eng. Ok, I know Nik Aziz once call Guan Eng Khalifah Umar Abdul AZIZ. But that doesn't mean he is the father of Guan Eng. He may love Guan Eng very much and want to adopt him as a son but that only make him the "bapak angkat kafir". True or not?