A white bicycle and missing home

The weather is warming up here. Should be just above 20 degree Celsius during day time. It seems as if it will soon be spring...my favorite time of the year in a colder country like this. Yet, I think it is too early. Spring in Taiwan normally starts in late February or early March. Guess it's the global warming thing.

Anyway, I bought a bicycle yesterday. I gave it a name - Coral. Going to ride it whenever the weather permits. 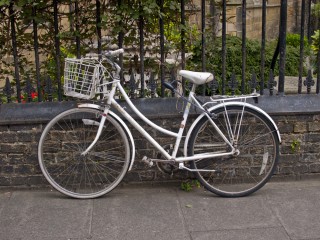 Taipei is indeed a wonderful place. The people are also generally very friendly. But I do miss home sometimes, especially the food. My current vegetarian diet is okay, but I'm still getting used to it. Nothing like having the diversity of food back in Malaysia.

Overall, I'm now very fond of Taiwan, but it's nothing compared to Malaysia. Malaysia is after all my motherland, and no matter what, I will always love it.

Whenever I think of it, it makes me wonder why some fellow Malaysians think and talk so lowly of our own country. They liken it to countries such as Zimbabwe or Myanmar or all those other sad places. They said our government is as corrupt or as evil as those in that countries. Yes, Malaysia and its government are not perfect, but I believe they are not as bad as portrayed and that we can fix them without having to destroy what we already had built over the past half a century since Merdeka.

Some argued that we need to endure some hardship if we want Malaysia to have a better tomorrow. That we should take the huge risk of electing an unknown entity to replace the government perceived to be corrupt and inefficient despite its track record of successfully maintaining harmony and developing the country for several decades.

I disagree with such nonsense. I believe that we can achieve things better by being understanding, rationale and moderate. That's the approach taken by our forefathers when they founded Malaysia. We achieved what we have now without having to sacrifice too much blood and lives. An achievement admired by the rest of the world.

Soon, Malaysians will go through the most fiercely contested general election in the country's history. My prayers - for them not to tear the country apart to satisfy the greed and lust for power of a few politicians. Politicians come and go, but the country and the Malaysian way of life should remain. They should remember this as they cast their votes a few weeks from now. Once destroyed, we may never have back what we have and take for granted all these while.

It should be spring here in Taiwan by the time Malaysians have their election. Hopefully, Malaysia will still be as beautiful as Taiwan in spring after that.  Better Taiwan spring than Arab spring.
Posted by BIGCAT at 15:56