Now I am about to sleep. It is past midnight.

Thought of checking out news from home first, especially the Pakatan rally in KL. Stumbled upon something very weird. I saw this picture and question at  Terkini: Mana Satu Arah Kiblat Penyokong Pakatan Rakyat?  and it made me wonder what had went wrong with the Pakatan Muslim followers attending their parties' rally at Stadium Merdeka yesterday - 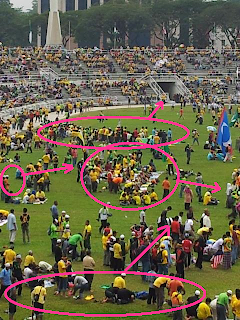 I am not very religious but I do know that there is only one direction to the Kiblat in Mecca and Muslims are supposed to pray facing that direction. It was not as if they are praying at separate locations. They were actually just a few meters apart and definitely can see the directions of Kiblat chosen by each others. Or did they?

I texted my journalist friend back in Malaysia to verify the authenticity of the picture. He happened to be covering the rally and was inside the stadium when the prayers were performed. He confirmed seeing the weird thing happening. It was right after the azan of the Zohor prayers. The picture was indeed authentic. The Pakatan Muslims did pray facing different directions.

Were the Pakatan Muslims being blinded from seeing the right direction of the Kiblat due to their willingness to let Guan Eng politicized the word "Allah" for his vested political interests? WAllahualam (Only Allah knows).
Posted by BIGCAT at 01:27