Looks like Anwar and the gang are doing very well these days. They can even afford jet-setting lifestyle....of course courtesy of a friend....who expect nothing in return (ehem ehem ehem).

I went through the pictures of them monkeying around in the plane again this morning and find this one as being the most interesting. 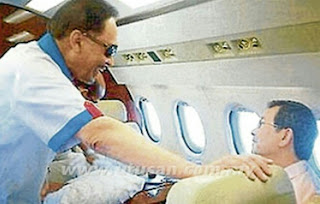 Tan is rhe only DAP guy seen on the plane. Lucky boy.

I guess the rest of the DAP entourage from Semenanjung for the Pakatan 's Hari Malaysia celebrations are flying economy class along with Guan Eng that day.

See, Guan Eng has always strives to be seen as frugal. He don't want to show off show off like his Malay counterparts. That's very Chinese of him. Of course being formerly from Umno Anwar like to show off from time to time, just like all those Umno people of the mangkok variety who are the bane of their own party.

Anyway, back to that picture, I think Tan looks a bit uncomfortable. Don't know la whether it's because he rather be with his DAP comrades flying economy class or it's because Anwar didn't use a bit of deodrant. I rather think that Tan was uncomfortable because of the former. He is afterall one of my favourite DAP leaders due to his cartoonish character and relatively pleasant personality.

Being a good DAP man, Tan would definitely wants to emulate Guan Eng's examplary frugal ways. I bet Guan Eng wouldn't be very happy to see Tan in that jet plane. Not good for image ma.

Well Guan Eng, once in a while can la. Cut the Mr Bean some slack, ok? Don't worry, you had cemented your image as a very efficient and spend thrift leader among at least the Chinese community in Penang. You are the man, ok?

Actually, I am also striving to be like Guan Eng. Be very frugal. And then made it known to the whole wide world about it. In return, Guan Eng got to be chief minister, me....errrr, I got a lap top :-) I know it's pathetic but hey, better than nothing liao.

Ok, my next emulating Guan Eng project is on how to afford a holiday in Italy (or was it Spain) while maintaining my frugal image. Hmmmm....can do that during CNY somemore, eh Guan Eng. Very smart la you. This one I have to consult my Chinaman. Only Chinaman has the decipline to pull off these sorts of tricks. Malays cannot one. Look at Anwar, not yet become PM already jet setting here and there. What to do, Malays like that la. Must have style.
Posted by BIGCAT at 19:39