Are we sure things are so awful? (UPDATED)

UPDATES
I had meant this posting as a call for us Malaysians to reflect on the reality that we are citizens of a beautiful country, built over the years by our elders based on tolerence and respect for each others. I had meant it as a reminder that our country, despite not without its flaws is not such a bad place at all. It's meant as an advice for us to count our blessings. Unfortunately, the comments which came in started to get racial. I'm not sure what prompted the first racist comment, but as it always does, for every action, there will be a reaction. Try to identify the first racist comment and we will find out what could spark the fire which could burn down this country.

ORIGINAL POSTING
At my sister's place. Just now was watching Asia Food Channel on Astro. I don't have Astro at home. It was an interesting food documentry called Dining with Death. In that particular episode, its about people eating all sorts of bugs and other creepy crawlies. One of the things shown eaten was that big fat larvea found at sago trees.The young Thai girl interviewed said the thing tastes very nice and creamy after deep fried. Exactly how my arwah dad described it. Yup, my dad  ate that awful looking creature. He called it by its Javanese name, ulat beton. 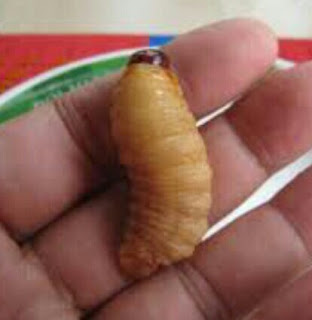 Well, can't blame my dad as it was during the Japanese occupation. Food was scarce then. Nonetheless, I don't think I can eat the eaky looking thing even at the risk of starving to death. Then again, I may say that because I have the luxury of the present day. If things really turned bad for this country one day, and the situation warrants it, I may eat even more awful stuff than that thing. Well the Thai girl and her poor family are still eating that thing...not because its delicacy but because its there to be eaten.

Reflecting on this eating funny stuff thing, I think we Malaysians take things for granted too much. The luxury of plenty that we enjoy now do not come about like magic. We tend to forget that it's the result of careful nurturing of this country by our elders over the half century since Merdeka. We tend to forget about their sacrifices in these days where personal interests and ambitions reign supreme. We tend to be blinded by arrogance and selfishness into thinking that we are always right and things of old are useless and should be discarded.

But are we as a society strong enough to endure the upheaval of change? Are we really sure that what we have now are totally bad and need to be replaced with things that we are not sure will be good for us? Hudud laws as intepreted by Pas people, are we really sure we want to risk having such thing? Why can't we just work together to improve what we have now? Yes, I know, there are corruptions and abuses in the establishment, but no system is flawless. These are things that we can fix without uprooting the whole thing. I'm quite sure things will be better if we rationally fix it together. I'm confident that Najib will do his best to get rid of those corrupt people if we give him the mendate to do so. The alternative is Anwar and his fanboys. Are we sure they are as pure as they claimed themselves to be? Are we sure they are better? Are we sure we share Nik Aziz' hudud dream? Are we sure Guan Eng' sue sue sue childish tantrums is what we want to hear everyday when these bunch of clowns take over and rule over us?

Honestly, I rather eat a bunch of that awful ulat beton if I can avoid being lorded over by those people who if given the chance will rip our country apart to satisfy their arrogance and lust for power.
Posted by BIGCAT at 06:54