A good news for Pengerang

I will sit back and enjoy the tabling of the Budget 2013 today. I am quite confident that it will be a good one.

Anyway, my neck and shoulder still hurts. Walking around like Robocop.

So, I will leave you all till later with this good news from this handsome dude. 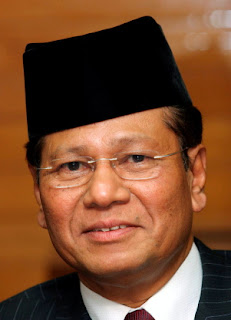 NUSA JAYA: THE Environmental Impact Assessment (EIA) report on the Petronas Refinery and Petrochemicals Integrated Development (Rapid) project has been approved after it had fulfilled requirements under Section 34A(2) of the Environmental Quality Act 1974.
Menteri Besar Datuk Abdul Ghani Othman, who confirmed this during a press conference here yesterday, said the report was approved on Aug 27.
The approval of the EIA by the Department of Environment also entailed an Environmental Management Plan (EMP), which outlines guidelines for sustainable management of the environment in areas in and around the RM60 billion project.
"The report had been approved last month, while the related Environmental Management Plan is being processed by the relevant authority.
"This would ease any more questions on this matter," said Ghani.
A statement from state DOE director Mokhtar Abdul Majid stated the EMP report for the project's ground works and construction had been submitted to the agency's Johor branch on Tuesday.
"The detailed report for the Environmental Impact Assessment of Rapid was initially submitted by Petronas to the DOE headquarters in Putrajaya on June 4, 2012, for approval.
"The scope of study conducted by DOE-registered EIA consultants covers air and water quality, petrochemical process and oil refinery, risk analysis, public health, traffic impact, noise, socio-economic, and economic valuation on environmental impacts," the statement read.
The EIA was initially displayed for 30 days from June 9 to July 8 at 11 display centres and 15 DOE offices nationwide.
"The display period was then extended until July 21 because of the public's request," said Mokhtar in a statement.
A feedback panel, which met at the DOE headquarters on July 5, also sought input from related agencies, individual experts on environmental and socio-economic fields, non-governmental organisations, and representatives from the Federation of Malaysian Consumers Associations (Fomca).
Mokhtar also said a 500m-wide buffer zone surrounding the project would be made off-limits to environmentally-sensitive premises such as housing, hospitals and schools.
"Petronas is also required to prepare a green zone and a 500-metre buffer zone within the project site as required under the EIA report."
Mokhtar said the DOE had required Petronas to adhere to strict water and air quality control measures in accordance with international standards and best available technology.
"The installation of effective pollution control equipment meeting the best available control technology and monitoring through a Continuous Emission Monitoring System are methods which could minimise the impact of air pollution."
Earlier, Ghani said the state government was willing to listen to the Pengerang residents' woes in relation to the land acquisition exercise for the oil and gas hub.
As of now, about 50 per cent of a group of 434 residents have yet to give their consent to the compensation for various reasons.
He advised residents that failure to accept the compensation might require them to take their respective cases to the High Court, and this would incur more costs.
"Those who are playing hardball, hoping to get higher compensation, may end up losing more if it goes to court," Ghani said.
"The remaining who have yet to accept the compensation, may been misled by certain parties who are believed to have influenced them to ask for more or become a stumbling block."
Posted by BIGCAT at 11:03