Losing the battle of perception

One of the most irritating thing about BN's media campaign strategy is their inability to realize that it is important to be liked.

For instance, you can't win the battle for public perception if your main man leading the fight is an ugly arrogant dinosaur who uses the BN's media facilities more to promote himself instead of BN itself.

Admittedly, you need someone firm, but the person must also be a cool dude. Someone that people like.... especially the young people. And, of course, most importantly, someone who is sincere with the job.

Instead BN has the likes of Rais Yatim, Tengku Adnan, Ahmad Maslan.... hmmm, I rather reserve my comments. Need to conserve my energy for the real fight leh. 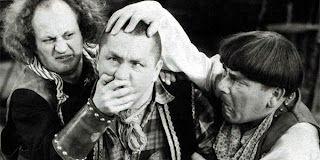 Can't afford the MCMC coming to my house and seize this laptop which someone gave me. I can't afford to buy a new one, ok? Rocky, you got back your Ferrari or not already? Well, never mind.

Well, the same thing with media houses which are supposedly aligned to the BN. They are also led by mostly people who think they are so clever without realizing that they are not really that hot.

Ok, not all of them are like that, but MOST of them. If you don't believe me, go and ask that cranky Kadir Jasin. He should know...

And to the newspaper bosses - can you all tell your pro-BN columnists not to try too hard to sound too clever. Irritating lah. My English not so powerful you know. Can't really understand what they are trying to tell in between those sophisticated words, ok?

What? I need to improve my English instead? Well, never mind. I will just go and read Harian Metro. Got juicy front page story about Gigolo Panas (hot gigolo) some more. You all stuck up perasan pandai English newspaper editors can shove your newspapers up your....ok, I need to stop swearing....

Oh, by the way, the only English newspapers which is pro-BN is actually NST....and not even BN people really want to read it, thus the relatively low circulation. Umno members for instance, mostly prefer to read Harian Metro, ok? Star? Malay Mail? Sun? Don't bluff la. All those are actually pro-Pakatan. They need to be so as they need the pro-Pakatan audience to keep up the circulation numbers. They put pro-BN stories just so they don't run into trouble with their owners. If you don't believe me, go read Helen Ang. She wrote extensively about  MCA's The Star being the gunting dalam lipatan...please google if you don't know what that means.

Television? Well, I don't really watch television, so I don't know too much about it. But I heard the rating of TV3 news is declining. Definitely need to expend beyond that Jom Heboh strategy.

Then there's the cyberwar front. I don't think BN is doing too hot there either.

Pakatan got Malaysian Insider, Free Malaysia Today, Malaysiakini, etc. BN got what? The Mole is probably the only pro-BN English news portal around. That one also operating at a very low budget and has to restrict itself to covering mostly the sopo blogs.

How effective are the Pakatan's web portals? Well, FMT is actually among my blog's top ten source of page views. That's where the DAP cybertroopers who are clogging up my comment section come from, I guess. They are a bit irritating, but I am getting used to having them hanging around my blog. Good also, as I consider it as a sign that this blog is making a bit of an impact, which is significant enough to warrant their attention and efforts to counter it.

So, what happened to the allegedly lots of money spend by BN on cyberwar? Honestly, I don't know. What I am sure is that Johor BN do not have specific budget for cyberwar. They simply do not have the money for it.

PM DS Najib Razak, being the big boss should realize these problems that he has in the BN's war room and do something about it ASAP. Not much time left as the deadline of the general election is already too near.

p.s Datuk Najib also need to do something about that pompous character now running the Umno's war room at the party headquarters. Really stupid la that one.
Posted by BIGCAT at 09:13