Not all of them are racists

As I had stressed in my previous postings, not everyone supporting the existence of Chinese schools in this country are Chinese racial extremists.

In fact, many were uncomfortable, or even worried when the issue of Chinese education turned political when Dong Zong, under the leadership of that insidious character Yap Sin Tian roped in the backing of DAP during their rally in Kajang in March.

DAP, which is trying to monopolize the Chinese vote bank had immediately jumped in support of Yap, whose motives were said to be more personal rather than actually fighting for the betterment of Chinese education. See the article by Joceline Tan again - 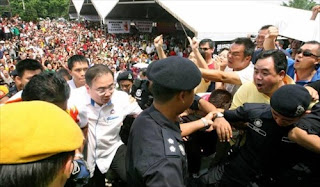 Muhyiddin on Chinese schools
Posted by BIGCAT at 17:18