Anwar or Razaleigh, does it really matter?

Saw this interesting story by

KUALA LUMPUR: Pas said it is not a certainty that Opposition leader Datuk Seri Anwar Ibrahim will become the Prime Minister if Pakatan Rakyat wins in the next general election.

Its information chief Datuk Tuan Ibrahim Tuan Man told The Mole there will be two deciding factors which will determine a leader’s appointment to the post.

“Firstly, it depends on the number of seats won by the party.”

“Secondly, all parties in Pakatan Rakyat must agree on the person to be appointed as the Prime Minister,” Tuan Ibrahim said.

When pointed out that Pakatan has previously agreed that Anwar be the Prime Minister (if Pakatan wins the general election), Tuan Ibrahim said at the moment, in theory, all component parties will follow Pakatan’s status quo.

However, Tuan Ibrahim said: “But I believe we will have to take into consideration the election results as well.”

“We need to see which party is more dominant in terms of winning contested seats because it can determine who should become the PM.”

“That’s why I keep urging our members and election machinery to work hard in winning the election,” he added.

Tuan Ibrahim said this when asked to comment on talks that Pas' Syura Council, the party's highest decision-making body, is not in favour of having Anwar as Prime Minister.

Asked to clarify on what the council’s stand (on Anwar as Prime Minister), Tuan Ibrahim simply said: “There is no issue about it.”

DAP chairman Karpal Singh in a news report had maintained that Anwar will be Prime Minister if Pakatan wins in the next general election and dismissed such talks as a mere speculation.

A blog post at AIDC has stated despite widespread rumours of Pas’ Syura Council rejecting Anwar’s as Prime Minister in waiting, it has not been officially confirmed or denied by the council.

The same post also highlighted that Pakatan is also keen to have Barisan Nasional MP for Gua Musang Tengku Razaleigh Hamzah as the candidate for the opposition coalition's Prime Minister as he has no problems with opposition leaders and some leaders from Umno.

Tuan Ibrahim described the speculations as baseless, as Razaleigh or better known as Ku Li is not a member of any Pakatan parties.

“This is only an election's speculations. Ku Li is an influential politician but he is not a Pakatan member. How can we choose to appoint him?”

Mohd Amar also said there is no discussion among Pas leaders on the Prime Minister's post and that Pas will follow the decision by Pakatan leadership on the matter. 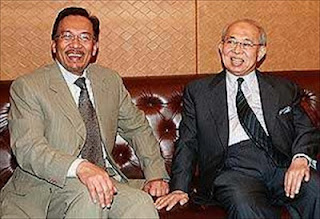 I actually first read about Pakatan replacing Anwar as their number one choice with Tengku Razaleigh in NST a few weeks ago. However, I was then skeptical about the story as the person quoted was that ex-PKR Bayan Baru MP Zahrain Mohamed Hashim.

But then again, the trees would not be swaying if there is no wind, isn't it?

Now that talks about Anwar being replaced by Pakatan as their number one man is gaining momentum, maybe it's worth a bit to look at how things going to be between those who support Anwar and those who wanted him replaced.

At one corner will be the Pas' Anwarinas, DAP's Lim family and cronies and of course Anwar's party office bearing wife and children as well as most of the PKR's high council.

On the other corner should be the Pas' ulama faction including those from the Syura Council, DAP rebels with the most prominent being Karpal Singh who despite insisting that Anwar will be PM knows for certain about Anwar's weaknesses for anything cute and the few PKR independent minded individuals worried over the party's future due to the grip of Anwar's ass-lickers (figuratively...I think) led by deputy president Azmin Ali.

Personally, I don't think the anti-Anwar side will win....at least until the election is over.

They were a bit too late in initiating the move against Anwar and the forces against them are already too powerful within Pakatan. The opposition coalition will have no choice but to go on with Anwar as their leader into the election which I believe will be held within five weeks from now.

They will have to wait until after the election to really make their moves so as not to cause serious damage to their electoral chances.

But then again, with the chances of Pakatan taking over Putrajaya seem to be diminishing by the day, the whole thing doesn't seems to really matter anyway, isn't it?
Posted by BIGCAT at 11:45