I am not really the celebrating type of person.

Events that I really make an effort to celebrate are rather limited - Aidil Fitri, Aidil Adha, Chinese New Year and several birthdays of my loved ones.

What I meant by making an effort to celebrate is that I would cook something special, bake a cake, buy a new dress, buy presents, balik kampung etc for the occasion.

There were times when some people tried to make me take part in other celebrations, but I normally ended up with just wishing them the very best for that day.

I started celebrating Chinese New Year a long time before I met my Chinaman. I was studying for my A Levels at that time and it happened that I was the only Malay in my class. Most of my closest friends were Chinese and I just tagged along with them. But back then my little effort to prepare for the celebrations was limited to saving my coins to be used for the black jack table at my friend's house. Gambling for fun among family members and friends was part of the celebrations.

My Chinaman never actually encourages me to celebrate Chinese New Year. He thinks that sometimes I am a bit too "over" with it. I'm after all a non-Chinese. But he did help me buy new year decorative items and other stuff every time the CNY is around the corner like now.

This year I will be celebrating CNY on my own in Taipei. My Chinaman is not coming to see me. His entire family is coming to his place in KL from Singapore for the celebrations. Well, it's a bit sad but I don't mind it too much. I know that his family is more important to him than myself. I'm number two...or maybe number three behind his job. Well, never mind....at least I'm not behind Lim Guan Eng or DAP in his list of priorities :-)

Yesterday I went to buy my CNY stuff at Shida Night Market near the university where I am studying. The place was packed with people, but it was fun. 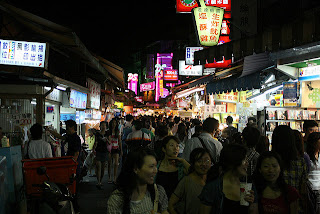 I went there with my new best friend Lin from Hong Kong who is a member of my research team. She is also a vegetarian, and we ended up having the best vegetarian dumplings I have ever tasted at one of the stalls there.

After coming back from my shopping last night, I checked for news back home but failed to find anything major which draws my interest. Got one which is rather funny about a celebration though - All the hoo-ha over Valentine's Day

These Pas people really got nothing better to do, I think. Year in year out they make such noise about the Valentine Day thing. I don't celebrate such nonsense too, but why la make it into something so important to prevent others from having a bit of fun. It is not even like the Valentine Day celebrations is encouraging free sex....like that LGBT stuff supported by Pas' allies.

Ok la, it may not be very Islamic but if a couple wants to have a romantic candle light dinner and the boy giving the girl some roses....let them be la. No need to have a campaign against such thing. It makes us Muslims look silly, actually. Discourage them a bit a bit only enough la.