Been following the story of former Pas deputy president Nasharudin Mat Isa and can't help feeling sorry for the man.

I found the guy to be a nice and idealistic fellow. However, he is also, in my opinion a naive politician for believing that someone like him could survive in Pas, which was supposed to be a squeaky clean party which champions Islam. He was definitely no match of his fellow Pas leaders, who are mostly real politicians in the guise of their ulama clothing.

Nasharudin has, since his ouster from the syura council, been labeled as a traitor by many of his fellow Pas leaders. But to his credit, the guy has kept his cool. He still say what to him are the right things for Islam and the Muslims as well as for the rest of the country.

From what I read, I concluded that Nasharudin believes that Pas role is to provide the check and balance for Umno, if not an alternative leadership for the Malay Muslim community. But to him, for Pas to be able to do that, it must stay true to itself as an Islam-based party and not like what it is now - a wishy washy party which is bending backward to the breaking point on even its core Islamic ideals to accomodate the whims and fancies of its secular allies, particularly the Chinese-based DAP.

So desperate were some of the Pas leaders to win the coming election that they are willing to do almost anything to keep the DAP happy. Their's pandering to the wishes of DAP was rationalized by the belief that they could secure more Chinese votes especially in Malay majority areas with a large percentage of Chinese electorates.

This was also why Pas president DS Abdul Hadi Awang and spiritual adviser Datuk Nik Abdul Aziz Nik Mat were lightning quick to support the demand by DAP's Lim Guan Eng for the word "Allah" to be used in Malay-language bibles. So quick was Hadi and Nik Aziz on the matter that they tripped themselves and tergolek dog when the Pas' syura council, realizing the overall danger of giving in to DAP on that matter decided against allowing the Guan Eng's nonsense. Both Hadi and Nik Aziz had since made a U TURN, much to the chagrin of DAP leaders such as Karpal "the king" Singh.

For perspective, please bear in mind that none of the Pas candidates will ever be contesting in Chinese majority areas which were considered as "safe areas" by Pakatan for the coming general election. These type of constituencies were mostly reserved for the supposedly multiracial but actually Chinese based DAP. There is no way DAP is going to let the Malay-based Pas a chance to contest in a safe Chinese area like what the supposedly racist and domeneering Umno did when it let its Chinese ally the MCA to contest in safe Malay majority constituencies under the Barisan Nasional tickets.

Pas leaders such as Nasharudin realized this insincerity of DAP and prefer to put the interests of their party ahead of those of the opposition coalition. They rather not win the election as long as Pas remains a real Islamist party and not just some hypocrite entity which uses the Islamic label to be just a junior partner in a coalition dominated by DAP.

And for that, Nasharudin was casted aside by his fellow Pas leaders who are now ever willing to sacrifice even the party's core ideals to get a chance to sit on the cushy seat of power in Putrajaya. In his place, they put Mat Sabu as deputy president.... 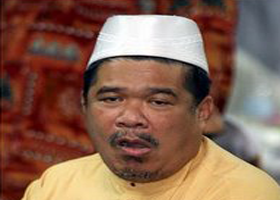 ....which I think is a comical tragedy not realized by the ordinary Pas members who really believe that their membership and sacrifices for the party will ease their path to paradise in the after life.

Nasharudin's political future may be bleak now but I think the man will emerge better as a person and a Muslim. I believe his sacrifices will not be in vain. In this age of unbridled hypocrisies among Malaysian politicians on both side of the political divide, Nasharudin's case emerged as a beacon of hope that not every good ideals are dead. Let's hope that there are more good selfless men and women among our Malaysian politicians to lead our country to a better future.