When DAP sec-gen Lim Guan Eng reignited the highly sensitive issue of the word "Allah" in Malay-language bibles in his Christmas message more than a month ago, his most likely intention was to make the Christian bumiputra people of Sabah and Sarawak hate the BN federal government.

BN was supposed to be in an awkward position to handle the issue. To a certain degree, Guan Eng succeeded, especially when that fool Ibrahim Ali of Perkasa, in his haste to be seen as a Malay hero suggested for any Muslim who was given the bibles with the word "Allah" in it by Christian missionaries to burn it. This indeed have the effect of angering the Christian bumiputra community in Sarawak and Sabah who have been using such bibles since they first converted to Christianity a very long time ago.

What Guan Eng however failed to realize at the moment he started the fire was that, the issue actually put Pakatan in an even worse dilemma.

He underestimated the backlash from the conservative elements within Pas who simply cannot accept the possibility of the Malay language bibles with the word "Allah" in it being distributed among members of the Malay Muslim community. These Pas ulama simply can't be at peace with their conscience if such thing ever happened. Even the cushy seat of power in Putrajaya would not be worth it for them to betray the ummah.

As of how Guan Eng could had overlooked such an obvious thing, the answer probably lies with opposition leader Anwar Ibrahim's strong support for allowing the "Allah" word in the bibles. Anwar must had given Guan Eng an assurance that Pas leaders would go along with the whole thing as the issue would benefit Pakatan in their quest to conquer Putrajaya. The votes in Sarawak and Sabah would need to be won if they ever want to succeed and it was proven during the state Sarawak election two years ago that DAP benefitted immensely from stoking religious sentiments among the Christians, especially the Chinese Christians there.

Hadi and Nik Aziz were however opposed by Pas' more conservative leaders, particularly those who sits in the Dewan Ulama. Such was the resistance by the Pas real ulama that even Nik Aziz, who chaired the all powerful Syura Council had to make a U turn and retract his support for Guan Eng.

The fire storm started by Guan Eng however rages on till today.

In an apparent attempt to extract Pas from the issue which proves to be very damaging for the party, Hadi had on Friday announced that Nik Aziz had explained Pas' U turn to object the use of "Allah" in bibles or by non-Muslims to the DAP leadership and the explanation was very well received by them thus putting the issue at rest.

Unfortunately for Hadi, DAP chairman Karpal Singh who is well known for his zero-tolerance for Pas' bullshit immediately came out with a statement which effectively labeled the Pas president as a liar.

Here is the report by Bernama -


GEORGE TOWN, Feb 2 – It is wrong to say the PAS’ Syura Council’s decision regarding the Allah issue is well received by non-Muslims including DAP’s leadership, said DAP national chairman Karpal Singh.
Karpal Singh told a press conference here today that he was disappointed with PAS president Datuk Seri Abdul Hadi Awang’s statement to this effect.
He said this in commenting on a news report quoting Hadi as saying the prohibition on non-Muslims from using the “Allah” word in their holy books was settled and that the DAP’s top leadership had also accepted the explanation on the matter given by PAS spiritual leader and Kelantan Menteri Besar Datuk Nik Abdul Aziz Nik Mat durin a brief meeting with him (Karpal Singh) in Penang last Monday.
He stressed that nothing was discussed regarding the Allah issue when he met with Nik Aziz at an informal meeting last Monday.
He said the Syura Council should not stick firmly to its stand as it conflicted with the stand taken by Pakatan Rakyat which is made up of the DAP, PAS and PKR.
Karpal Singh added that the DAP was not meddling in the internal affairs of PAS but instead was upholding a stand which had already been taken by PR after DAP advisor Lim Kit Siang, Hadi and opposition leader Datuk Seri Anwar Ibrahim, who is also the de facto leader of PKR, had agreed that the word Allah can be used by non-Muslims. – Bernama

I think Nik Aziz should now better be careful of what he says or risk ending up being walloped like Hadi. In Pakatan, Singh is indeed King....so to speak la. 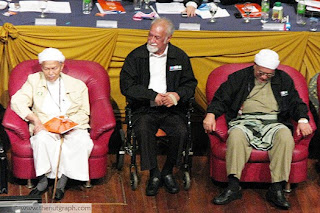 Well, looks like Pas is not finding its way out of the situation any time soon. Not only they lose a lot of their Islamic credentials due to this, now they even get their president being called a liar by their own ally.
Meanwhile, as the others are fighting like crazies over the issue, Guan Eng is basking in the afterglow of being a Christian hero (even though his actual religion is still a subject of much speculation). That's why we never hear even a squeak from him on the issue. Started the fire and then ran and hide inside your father's pocket eh Guan Eng. Real bastard la you Guan Eng.
Posted by BIGCAT at 08:26