I had this craving to eat crab today.

Called up my Chinaman and he agreed to buy me crab dinner. I told him I didn't feel like going to his favorite Fatty Crab in PJ. Tired of having to wait for the table there. So, he said he take me to this nice seafood restaurant near Kampung Subang.

He came to pick me up and only then I found out that he had cut his hair....and dyed it some more....real jinjang-like. He said it's Korean...I just said ya lah ya lah. Can't argue....sure kena hantam one if I did. Anyway, still handsome leh...so, never mind. He looked something like this tonight (but a bit older la) - 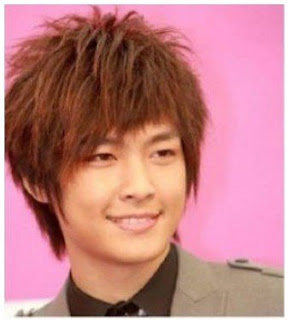 It turned out that we still have to wait for our table at the restaurant. Almost 20 minutes. But the place is really changgih. Part of the roof can opened up. The toilet was Bali-style and smells of lemon grass. Then the many tanks got huge lobsters, spider crabs, ugly looking fishes etc. Very expensive liao.

I think the lobsters were the most expensive. If I was not mistaken it's Rm24 per 100g.

Me and my Chinaman had some tiger prawns (soup), two local crabs (fried), broccoli (fried), and an oyster each (raw). He had his usual German beer and white wine. I had Chinese tea and sea coconut for dessert. It all costs about RM230.

We observed the packed restaurant and decided that our dinner was the least expensive. The other tables could easily costs more than Rm1k. The dishes kept coming at the table next to us....lobster, then abalone, then crabs, then I don't know what....

There were one or two tables with Malay and Indian customers and maybe a few tourists. The rest were Chinese.

I remarked to my Chinaman that the Chinese are indeed not doing very badly if they can afford to have such expensive dinner. Surely not oppressed enough by Umno.

Hmmmm....I do wonder if the economy class flying Guan Eng had ever eaten such expensive lobsters....maybe some MCA funny guy from Malacca can ask Betty about it at the next Malacca assembly sitting, no?

My Chinaman just laugh off my remarks and called me silly.

"Eh, we Chinese work hard la. That's why we can afford to eat like this. Nothing to do with DAP or MCA or Gerakan. Stop being sarcastic and help me finished off the crabs. They are expensive, ok?" he said.

Ya Ya Ya Ya....just buy me crab dinner sombong already. As if I can't pay the dinner myself...never mind, I let him pay....he is the boyfriend, what...boyfriend pay for girlfriend....that's the way it should be, especially if he wants to be so macho and don't want to lose an argument.

Anyway, we didn't finish the crab. Too full. Just tapau them home.
Posted by BIGCAT at 00:24