(Additional note :Selamat Hari Raya Aidil Adha  to all Muslims. May Allah bless you all with the intelligence of knowing that if you quarrel among yourself, you will be bullied by others and there will be nothing you all can do about it)

One thing important I learned from operating this blog is that the most racist of Malaysians are actually those who go around accusing others of being racist. They are the ones who if not stopped will tear the multi-racial fabric of Malaysian society. 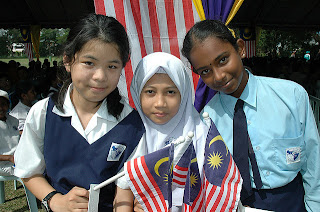 These are the same type of people who claimed their party to be multi-racial but actually used all the tricks they know to further the interests of just one particular race, their own race. Of course they masked the whole hypocrisy by shouting out loud that their rivals are racists.

They are also the type who claim themselves as being so racially tolerant and liberal. All that were good on the middle ground were claimed to be theirs while their rivals were all depicted as evil and corrupt and racist.

That was why they could not stand it when someone like me, who support their rivals who were supposed to be racists and evil actually have a relationship with someone of a different race and this someone could in fact be a role model of his community, which is THEIR community. Intelligent, successful, highly educated and principled. On top of that he is also an authentic member of his race and not some half-baked anglophile who worships a blue eyed blonde God.

They just could not even believe he exist. And even if later on they have to admit that he exist, they will try to run him down with all sorts of degrading and vulgar comments.
"No self-respecting man of our race will want to be with a snake like  you," they would say. For samples of such quotes, please read  the comments in this blog of late.
Well, if that is not being racist, than I don't know what being racist is all about.
Posted by BIGCAT at 00:55