Been down with a fever and still not feeling well. Need to see doctor tomorrow.

So, tonight I can't write much.

Just want to comment a bit about what Tian Chua, the Batu MP and PKR information chief was saying to the Mole today that the country's law against weird sexual practices under Section 377 of the Penal Code were archaic and irrelevant.

He was supporting the letter by Human Right Watch to PM DS Najib Razak which demanded for Malaysia to revoke laws deemed as discriminating against lesbians, gays, bisexuals and trans-genders.

Tian Chua was apparently speaking in line with the stand of his party leader DS Anwar Ibrahim who in January openly said that the above mentioned laws were to be reviewed once he comes to power.

I guess the LGBT people will go all out to support Pakatan in the coming GE13. It's a golden opportunity for them to get their lifestyle being accepted as "normal" in this country. It could also pave the way for same sex marriages to be recognized as lawful.

Well, Pas may make some noise over this, but I think it would not do them any good as they had forfeited their Islamic credentials when they agreed to be the junior partner within Pakatan. They currently have the smallest number of seats in Parliament which will also the case in the event Pakatan wins GE13.

I guess Malaysia will be an even freer country after Pakatan takes over....well, that is if you means free, as in anyone can have any type of sex as long as they were adults and consented to whatever perversions they intend to commit. 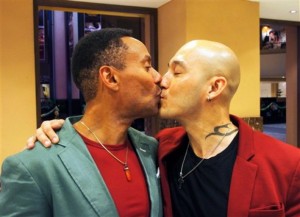 The above is the picture of Malaysian gay pastor Ngao Boon Lin kissing his African American "husband/wife". They had made it a point to hold their "wedding  reception" in Kuala Lumpur after getting "married" in New York.

Well, I guess after this, an adult man wanting to have sex with a consenting adult potbelly pig would also be allowed under Pakatan rule.

Errr....better check the legal perspective of that one with Ambiga.

But seriously, were LGBT people being prosecuted in this country?

As far as I  know, the most that were done to them were preventive measures when they tried to promote their lifestyle or when they were involved in illegal activities such as prostitution. Other than that, I think they were treated just like anyone else.

Ok, sometimes we normal people make fun of them, but we ourselves make fun of each other all the time too what.

Honestly, at the place where you all works, were the LGBT people being discriminated against?

Heck, at the place where I works, the LGBT people were in fact being given preferential treatment some more....I think.

But that will be another story for another day.