Cyber war defects and knives in my back

BN may at the moment gaining ground on almost all fronts as the GE13 draws near, but there is one front which I think they are still losing - cyberspace.

It's a fact that Pakatan cyberwar efforts were better financed, coordinated and executed compared to those of BN.

Guan Eng for instance has a large team of cybertroopers to attack his opponents and defend him when needed. You may observe them in action at this blog. Though not highly intelligent (except for a few), I found them to be quite disciplined and organized.

They also got better vehicles in the likes of Malaysiakini and Malaysian Insider, while BN has to depend on pro-establishment MSM's websites which mostly were cumbersome and unattractive. (I'm not talking about The Star website, ok? They are not actually pro-establishment)

One of the reasons I could think of about this defect in BN's machinery was that most of the BN media war efforts were led by old school media functionaries who don't think much of the cyberspace despite what happened to BN in 2008.

For instance, MSM journalists and their bosses mostly don't think much of bloggers, even those who were rated as grade A fighting on their own side. They are after all the professional journalists while those bloggers were seen as amateurs who are encroaching into their territory. Sometimes I don't blame them for having this attitude as certain bloggers behave rather arrogantly. But really lah, all these were such waste. Certain journalists can be quite irritatingly cocky too. These are all about human characters. Got nothing to do about being MSM journalist or blogger.

Sometimes it amazes me that even the most open-minded BN people doesn't quite understand how important it is to win the cyber war. A Press secretary actually asked me the other day whether all these blogs nonsense really have any effect at all.

"Don't you think that it's only just a few people from the same crowd reading the blogs?" he asked.
My answer was, "I think you may want to try the effectiveness of those useless blogs on your boss. I think I can arrange a few of them to attack him and from there we may see whether they are effective or otherwise. Want or not?" 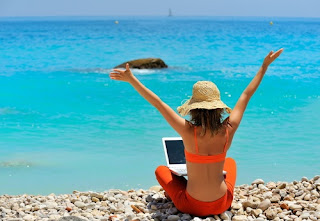 Well, that's aside, what actually triggered me to write this posting was because someone who knows who I am just now challenged me to prove that this blog is worth something. That I can initiate changes beneficial to myself, such as  by exposing several colleagues who have been stabbing my back so that they stop doing so.

Actually, I have limited energy and don't really feel like fighting those backstabbers who were supposed to be from my own side. I just want to be left alone to do my stuff. Cannot ka? So wasteful for me to spend my energy fighting those people....but, if they keep pushing me to a corner, I may be forced to react, forcefully. Let me say, it's going to be quite ugly after that.

After all, I got nothing to lose when it comes to a stupid petty kindergarten office politics fight like that. See lah how.
Posted by BIGCAT at 02:05