So, the Perak DAP cousins Ngah and Ngeh had admitted their involvement in a timber business in Pas-ruled Kelantan. I read the report in NST today.

They said the whole deal was all transparent. It's not as alleged that they got the deal to let the funny Pas guy Nizar become Perak MB, so they said. Ok lah, if they said so...whatever.

Anyway, I do wonder why they vehmently denied the whole thing at first. If everything was transparent, why not just say so?

Ya, what's wrong with DAP politicians becoming timber tycoons, right? In fact, they said they had done such "investments" before, and therefore probably they already are timber tycoons. Cool men...what you think? MCA people only want to be rich ka?

What however I really  don't like about the whole thing was that the cousins, despite finally admitting wanting to be rich, threatened to sue anyone who discuss the issue.

Discuss also cannot ka? Why so teruk one. You want to be rich, got timber project some more and you don't want people to say anything...too much la like that. Want to lodge police report some more, citing Section 8A of the Printing and Presses Act some more. Eh, I thought you all DAP people want that provision removed? Want better Press freedom, you said. What lah.

Well, Ngah and Ngeh are in all likelihood already timber tycoons. Nizar how? I think the cousins probably laughing behind Nizar's back when he was fighting like crazy to keep his Toyota Camry. They probably have their own fleet of Mercedez in their garage.

Here is my favourite picture of the three of them. Nizar really look like Amat the driver of some towkey here....what to do, nasib Melayu like that lah. 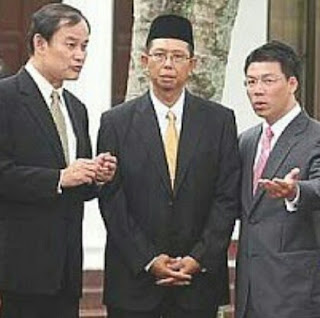