I am back at the office today, after being away for the most part of a week, thereby missing out on a number of events happening back at base such as nomination day, the first round of campaigning and such things.  On my way to the office, I took a detour, just to take a look at what's happening since last week and notice that all the campaigning paraphernalia are up and things look quite festive.

For the past couple of weeks, I have been getting updates purely from online sources, and a few phone calls to friends, and watching TV3 online.  Last night was the first time I managed to catch RTM news for the first time in weeks.  However, I must thank Bee Kim for her updates, along with Annie who has been moving on the ground, for they have given me a good feel for what is going on at home in Gelang Patah, and Johor in general.

Even though it is business as usual at the office, I will attempt to spend a little bit more of my evenings on the ground out there just so that I can have a feel of what is going on.  Not because I am that keen on the politics, but it is because I am invested in the future of Johor as I intended to make this my home and set up roots here.  What happens here in Johor, more specifically in Gelang Patah, will determine whether it will retain the attractive character that made me chose this place as my base two years ago. 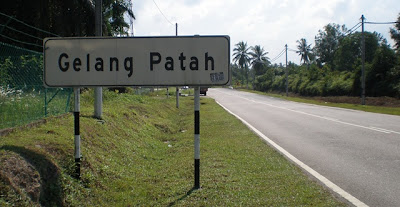 When I arrived in Gelang Patah sometime in early 2011, people were still getting used to the changes, and there were many talks about the many infrastructure projects going on in and around the JB area, but had not physically made an impact yet to local residents.

However, knowing what will eventually happen, I decided to go around to have a feel of Gelang Patah as it was before the transformation fully takes place.  Whenever I had the time, I would drive around attempting to get lost so that I had the opportunity to chat people up asking for directions (:D) as well as to gauge how hospitable the place is.  Everyone was so helpful, some going out of their way to make sure I won't get lost again.  Some of the places that I stopped by for directions became my regular haunts.  That was the beginning of my love affair with Johor.

Back then, many were still unsure of what to expect, or how their lives will be affected by the changes that was happening.  The general feeling was mostly positive, there was great anticipation for things to come and many voiced their expectations that the changes would bring greater prosperity.  There were also concerns about cost of living, displacement of local folks, whether they can adapt to the changes taking place and how they can stay relevant.

After going around the state, I began to realise that in Johor, BN is not merely a political party, it is an integral part of the social landscape, most especially in the rural and semi-rural areas.  Even in the largely Chinese areas with non-BN MP or ADUN, you would find BN public service centres (Umno or MCA) that attempt to resolve day to day issues faced by the public, organise events with government agencies and provide BN representatives access to grassroots issues.

For BN in Johor, it has never been about personalities that take up all the limelight in the newspapers and TV, it has always been their service on the ground that matter.  The politicians who became ADUN or MP must always touch base with these guys on the ground to remain relevant.  They expect their representatives to be part of their social fabric, to be accessible 24x7, to attend weddings, to help out financially, etc..

Johor Malays, especially those in the rural and semi-rural areas, such as what Gelang Patah largely is, appreciate leaders who are humble, accessible, reliable and hands-on, regardless of their ethnicity.  Pomposity, confrontational and absenteeism will get nowhere with these folks.  Neither would they give time to those who make promises but do not deliver, and they are fairly vocal, albeit in the usual subtle ways of Johor Malays.  From my observation, Johor Chinese locally, are not that much different from their Malay counterparts.

People would say that Gelang Patah in GE13 is all about the Chinese vote, but what I have seen and from what I have gathered in conversations with the uncles and aunties I have met on my travels around Johor, I have faith in their ability to be discerning when making their choices.