I am away from base at the moment attending to personal matters.  I received text messages from friends to watch the 11:30 announcement but I was already on my way, so I missed that.  By the time I managed to get access to the latest from Malaysia, the news is all over the net.  At last.  Now we only have to wait for EC to set the date for the 13th General Election.  I like the piece by Azmi Anshar on NST today though.  Heh .. rather harsh, but fitting. 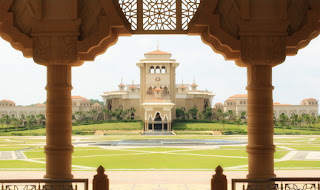 I have spent the last two years getting immersed in the Johor political scene, but unlike Ai, my knowledge has always been closer to the ground than hers.  Ai's work allowed her a closer look at the leadership and political strategists, whereas I am more inclined to lepak at the grassroots programmes and community gatherings engaging the JKKK, community leader or the Kemas teacher.  The dissolution of the parliament and state assemblies have long been awaited by everyone, and the speculations will start heating up.

Before I left, I heard from a very reliable source that Dato Abdul Ghani Othman will not be defending his Serom state seat, just as reported by Annie.  I don't claim to know the man, but from what I have seen of him, I like Dato Ghani.  Despite what people say about him, I found him to be mentally sharp, very analytical, has a charming personality, and such a cultured gentleman.  He has a swoon-worthy smile too.

Most of the people I met on the ground have deep respect for the man, maybe because he has been Menteri Besar for more than 15 years, but I can actually detect the awe in the way they address him or how they talk about their encounters with him.  There were some snide remarks, of course, but mostly were from people who never really worked with him or have grudges against him for one reason or another.

Regardless of what people say about him, the good and the bad, I wish he'd stay on as the Menteri Besar of Johor because I think he is good for the state.  For his detractors, let us just say that nobody is perfect, and Dato Ghani is far from perfection, but I can't imagine anyone else in the present leadership line-up being able to balance all the Johor variables with equal diplomacy, firmness and sensitivity.

However, I will be looking at the present Johor leadership to see who has what it takes to manage the situation in Johor after the General Election.  As for Pakatan's claim that BN Johor will fall this time around with the onslaught of Uncle Kit and gang, guys, wake up will ya?  DAP might win some state seats, but it is unlikely they'll do much better than the last GE, and all that "Chinese Revolt" hype, is just that, hype.  Johoreans have better sense than you think.
Posted by BIGCAT at 21:46