Just want to put on record that today has been a good day for me.

It was a very nice birthday party and his family members had been very nice to me.

His mother gave me a jade bangle just now. Told me she hope I could join the family soon. Was very touched by the sweet old lady's gesture.

Going to Malacca in a short while. It's the birthday of his nephew and niece.

His is a small family. So, everyone will be there.

I can't remember when was the last time I attended a kid's birthday party before I met him. I never have one as I don't celebrate my birthday. Even if I had wanted one, I don't think my family could afford the luxury back then. Yup, my family was that poor. Honestly, I can't even remember the birth date of any of my nine brothers and sisters....or those of my arwah bapak and mak...I remember the dates of their passing though.

As for his family, they celebrate almost anything. They make it a point to gather for the occassions. They even celebrate Christmas despite themselves being Taoists. Just for fun lah, he used to tell me. I have been resisting his attempts to make me celebrate Valentine Day for   the past nine years. My best excuse for avoiding such nonsense is my religion. Normally he would shut up when ever I said Islam prohibits or discourage me from doing certain things.

Anyway, his habit of celebrating this and that actually has more positives than negetives. For instance, him, his two sisters and cousins, some from Singapore, used to gather in their kampung to celebrate their late grandmother's birthday. Do you all know when is your grandmother's birthday? Well, now, they honour her along with other departed family members during Ching Ming. 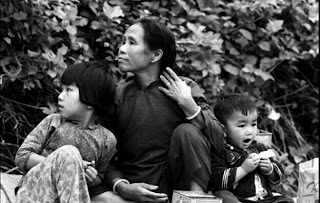 They make the effort to go back to their kampung, hike up the hilly cemetary, clean up the graves and pay respect to the souls of the departed. It's a practice which instils a sense of family values and respect for the elders.

It's one of the things I envy of him. His family is the best of his world...and I will not take that away from him....
Posted by BIGCAT at 09:15