Had lunch with my good friend, who is a journalist now based in KL. He used to be one of my main sources of information in JB.

We talked about politics of course. He wanted an update of Johor BN's preparations for the coming election.

All I can say is that, at the moment, Johor BN is 90 per cent ready. They are pacing their preparations with a projection that the election is to be held either in late October or early November. So far, everything seems to be going well, except in Kulai, that parliamentary constituency with the highest percentage of Chinese voters in Johor at 58 per cent.

At other places, the Johor BN seems quite confident about their chances.

Nope, Johor DAP and their allies will not get 90 per cent of the Chinese votes as they are hoping for to make the big impact.

Pas and PKR will be wiped out, I am quite sure about that....provided that the Umno people do not go around sabotaging among themselves.

As for my friend, he seems to be very tired of his job. Can't blame him....I can imagine...., working for the MSM must really be a bitch. Unlike independent bloggers like me who do not have any boss, they have plenty of those at my friend's workplace, with each one trying to outdo the others in term of assholeness.

The guy didn't say much but I can tell that he wish he could get out. I can see the stress on his face.

Told him to quit his job like I'm planning to do after the election. I even asked him to join me on a tour of Taiwan (me, that fat cinaman of mine and several other friends are planning the tour now). He just smiled and said he can't. He is married with two kids and his salary as a journalist is even worse than mine. His wife is a housewife. He can't simply simply quit his job.

The fella is virtually a slave as far as I'm concerned. 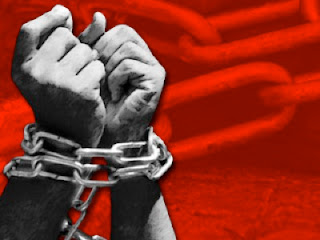 He can't simply writes whatever that he wants, no matter how good were his ideas. I know that his bosses will have none of that. They think they have the monopoly in deciding what the readers should be reading. They think they have such power and other journalists with different ideas such as my friend are threats. Really stupid arrogant morons. No wonder the newspapers are dying. They simply fail to comprehend the need for younger ideas from younger people to rejuvenate their products.

I asked my friend, who is a staunch pro-establishment person if he is planning to do something about the situation....this was his answer -

"I don't give a flying fuck what they want to do anymore. As long as they pay my salary and I can take care of my wife and kids, I don't give a shit. If I can get better offer, then I ll go."

Well, my friend, that's too bad. Hope you will soon get one of those stupid PR jobs which pay double what you are getting now as a journalist. Too bad the MSM is like that.
Posted by BIGCAT at 22:52