Any honest political observer should agree that the way DAP treats Pas is very much the way a rich towkay treats his useful but ugly kampung mistress. Not very nice to show around, but good for satisfying his needs in the bedroom at night.

For showing around, DAP always prefer to showcase its other more good looking  concubine, the liberal PKR. Pleasing to the eyes, but quite useless for houseworks or in bed. PKR is nothing if compared to Pas in terms of organisational skills and committed cadres. Pas followers are after all known to be willing to make sacrifices just in return for a promise of a smooth passage to paradise. That's what makes Pas very important to DAP's scheming to get to Putrajaya. It can't rely on the more dainty PKR to do the hard work.

Pas, on its part seems to tolerate the abusive relationship. Just look at the way Karpal Singh scolded Pas Youth over the hudud matter. Except for Johor Pas commissioner Datuk Dr Mahfodz Mohamad, not a single Pas top leader tried to defend Pas youth or the party's aspiration to set up an Islamic state. 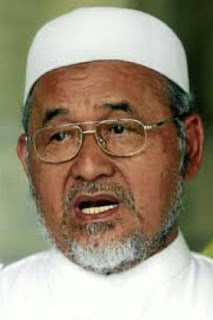 Mahfodz was quoted by NST today as saying that Karpal got it wrong when he claimed that Pas had dropped the Islamic state and hudud law agenda to be with DAP and PKR. The straight talking Mahfodz probably could not take it anymore that his party is treated so badly. He was however alone on this and if not careful may end up like that former Selangor Pas commissioner Datuk Hassan Ali. The other Pas leaders are for now keeping mum on the matter. They probably feel that the abuse by DAP are worthwhile as they may get some extra seats in the coming general election, courtesy of DAP's Chinese supporters. It's akin to a mistress tolerating the snoring of her fat towkey and his garlic smelling armpit while sleeping together at night.

I'm actualy honestly sad at the way Pas debasing itself to win the approval of DAP. Don't they have any pride left? Have DAP made any excuse as to its secular ways to please Pas? What kind of future government it would be once these people take over Putrajaya?

Will Pas ends up a discarded old and ugly mistress once its usefulness is no more?
Posted by BIGCAT at 12:12