I was quite surprised this morning when I read postings by my senior pro-BN bloggers about their unhappiness over a report by BH Ahad which was rather sympathetic of Tan Sri Abu Bakar Abdullah whose services as Public Service Department director general ended yesterday.

My seniors mostly feel that Abu Bakar deserved what he get when he claimed that he was rather unfairly treated and more or less unceremoniously jettisoned from his position. He was after all responsible for the very damaging proposed civil service's new remuneration scheme which was aborted following an outcry. My senior bloggers more or less feel that BH should not published a sympathetic angle of that story about Abu Bakar.

The whole thing came to me as a surprise as  caught in the crossfire was Jalil Hamid, the rather recently installed NSTP group managing editor. Jalil was formerly from the PMO. 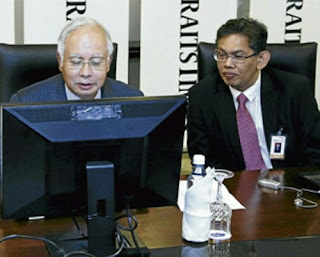 Personally, I don't think the man had intentionally tried to sabotage BN by letting through the story as alleged by some of the more hard hitting bloggers. I also disagree to calls for him to be sacked because of the story. I think that's a bit too extreme. Come on guys, the man I believe is fighting on our side and his appointment probably got the endorsement of the PM himself. He can't possibly be some sorts of an agent working for the other side. I find it to be far fetched lah. Anyway, I don't think we should be too harsh on our own "soldiers" as it will affect morale.

I don't know much about Jalil but had met him a couple of times. I found him to be a pleasant chap. He was formerly with Bernama, then Reuters, then Securities Commission, then PMO, then NSTP. From the few conversations that I had with him, I think he is committed to his job and trying his best under the circumstances which I am sure is not easy.

Whatever it is, I believe this episode confirmed my assertion that pro-BN bloggers are more independent minded than those on the Pakatan side. They are not afraid to openly criticise even the most powerful if they feel there is a need to do so. Not even someone who is probably close to the PM is an exception. I can't remember any Pakatan bloggers criticising people close to their leadership. Not even when such person over bodek their leaders to the point of damaging their own cause.

Had any blogger from the Pakatan side tried to correct Guan Eng's publicity handlers over the "51 pictures in a 28-page publication" hilarious comedy? I don't think so. Guess North Korean style propaganda is ok to them.
Posted by BIGCAT at 21:47