So, Pretty Betty was put in a rather awkward spot at the Malacca Assembly yesterday by MCA's Dayang rep Gan Tian Loo.

Gan asked Betty, who is the Kota Laksamana assemblyman whether she knows how did her handsome CM husband got his forehead plastered. Betty ofcourse got pissed...but she didn't actually answer the question. 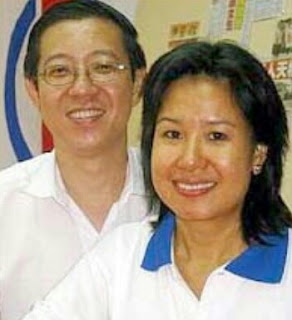 Gan then continued to ask Betty if she was the one who caused her husband's injured forehead. To that, Chew continued to keep quiet. It however greatly irked DAP Ayer Keroh rep Khoo Poay Tiong, who then challenged Gan to repeat his question outside the assembly where he doesn't have immunity.

Gan however continued with asking Betty if she knows her husband's former assistant Ng Phaik Kheng aka Lovely Rainbow. At that point Gan went a bit too much asking Betty if she had ever kicked the Rainbow. She didn't la Mr Gan. She just threw an ashtray (or was it a file?) at handsome boy only, thus the plaster on the forehead. Of course Betty cannot tahan with such terrible question by Gan whereupon she stood up to challenge Gan to repeat the question outside the assembly, probabl learning the cue from her fellow DAP rep from Ayer Keroh.

What la this new trend of assemblymen challenging each others outside the hall. Just speak up lah. Betty should just said she knows nut what Gan was talking about and that's the end of it with Gan looking just like a naughty boy. If she wants a more dramatic effect, she should just walk over to Gan amd give him a tight slap ala Taiwan parliament style...err, I think the Perak assembly gang had tried that with success. This one follow Singapore sue sue style boring la.

Anyway, I always prefer Taiwan than Singapore.
Posted by BIGCAT at 12:32