The charges involved insider trading amounting to 625,000 shares in Sime Darby Bhd, Maxis Communications Bhd, UEM World Bhd and VADS Bhd.
Sreesanthan, 52, allegedly used the information at his disposal on the acquisition, privatisation and corporate restructuring exercises of the said companies between 2006 and 2008, to acquire the shares.
He was charged on three counts of acquiring 75,000 shares of Sime Darby Bhd, ahead of the special purpose vehicle Synergy Drive Sdn Bhd's acquisition of nine companies within its group, including Sime Engineering Services Bhd, Golden Hope Plantations Bhd and Kumpulan Guthrie Bhd.
Two further counts involved acquiring 200,000 UEM World Bhd shares and 100,000 VADS Berhad shares while in possession of insider information on the UEM Group's corporate restructuring and proposed privatisation of VADS Bhd, respectively.
The last two counts were related to 250,000 Maxis Communications Bhd shares acquired ahead of the company's privatisation and of Binariang GSM Sdn Bhd's proposed conditional take-over of all voting shares in Maxis.
He allegedly committed all the offenses at Bursa Malaysia Securities Bhd in Bukit Kewangan, here between Oct 9, 2006 and Sept 18, 2008.
He is liable to a fine of minimum RM1 million and up to 10 years in prison for each offence under the Securities Industry Act 1983, and Capital Markets and Services Act 2007, upon conviction.
Judge Datuk Jagjit Singh set bail at RM300,000 bail with one surety for all the charges, ordered Sreesanthan's passport to be impounded and fixed Sept 20 for case management.
Securities Commission Deputy Public Prosecutor Ros Mawar Rozain prosecuted and M.Puravelan represented Sreesanthan. -- Bernama

Good job guys. Keep up the good work. Hopefully you all win the case.

BTW, on that dubious Talam land deal issue, I hope the Bursa people will handle that one. I was made to understand that that matter is under their jurisdiction and not SC's. I however stand to be corrected. If anyone could explain otherwise, please do so. The main thing is for the crooks involved in the Selangor government-Talam scandal to be brought to book and the rakyat's money be saved from not just the corporate sharks but also from the even more dangerous political crocodiles.

Anyway, do be careful if you want to feed these political crocodiles. They normally would try to take more than what you are willing to give.... 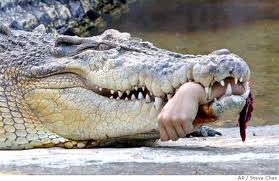