That day when I was in Sekinchan and going to KL via Kuala Selangor, I noticed there were so many flags of political parties hoisted by the roadsides, especially at the junctions. Most were Pas and PKR flags. It's almost like during an election. But some how I hardly saw DAP flags. Maybe DAP is smarter then their two predominantly Malay allies and saving their flags for the real election. Chinamen always smarter when it comes to being prudent, I guess. BN got some flags up too but they were far outnumbered by those of Pas and PKR. 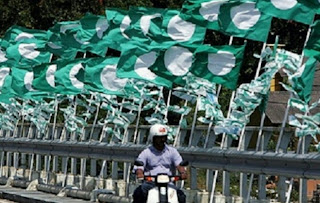 Anyway, I don't remember such culture of hoisting political flags in Selangor, back then when the State was ruled by BN. It was mostly confined to States like Terengganu, Kelantan, and Kedah. It's probably because those states got a lot of especially Malays who support the opposition. It's probably their way of telling every one that they are powerfull. See, I got lots of flags, I'm so powerful, so handsome....something like that. And all those motorists upon seeing the flags immediately fell in love with their party and going to vote for them. Uh uh uh....you got so many flags, you must be so handsome, I'm so gonna vote for you...something like that.

Well, no such thing in Johor....ok la got some but not too many. Johoreans are mostly sensible people.....hehehe


BTW, I did ask my Chinaman if he knows which flag belong to which party...and his sincere answer was that he only knows the BN's daching and DAP's rocket. The rest he don't really care. Really teruk punya Cina bukit. I know he voted for the first time in 2008 and it was for DAP. Well, never mind, if he can tolerate me being a BN supporter, I can tolerate him too for supporting DAP. At least I know he really cannot tahan with Guan Eng and agreed with me that  the son of Kit Siang is such a spoilt brat and nothing more.

Oh, almost forgot, I wonder who got the contract to supply all those flags to Pas and PKR. Must be rich by now. Somehow, my gut instict said the company belong to some  DAP supporters. Smart towkeys. Well, then again, I could be wrong.

p.s In case you all ever go to Kuala Selangor, try to buy that very nice kedondong with asam boi drink. Best in the world liao.
Posted by BIGCAT at 23:12