The other day, when DAP's Lim Kit Siang rubbished a statement by police about the infiltration of his party by communist elements, I couldn't help but remember how some, especially Pakatan people, campaigning not too long ago, to pressure the government to allow Communist Party of Malaya chairman Chin Peng to come back to this country.

Their argument was that Chin Peng is old and only wanted to come home to die here. The fact that he never renounced the communist ideology or the violent conduct of CPM throughout the insurgency which killed thousands were none issues to these Pakatan people.

From Wikipedia  - Chin Peng has never expressed regret overseeing CPM in their war against the Malaysian government, in fact, is proud of it as written in his book, "Every generation shapes its dreams. But you pay for your dreams. We certainly paid for ours. I do not regret having fought for what I considered - and still consider a just cause."

The possibility of that dream being still alive is always real. I wouldn't be too quick to rubbish the police finding if I am Kit Siang. It's not the police's job to defend Umno or Barisan Nasional. It's their job to defend this country and they should be allowed to do just that. Considering how gullible and childish-like some of the DAP leaders (such as Kit Siang's son) there is always the danger that they would not even notice the presence of the communists among their ranks.

I have to admit that I am not privy to the information of communists within DAP and would have to leave it to police to prove their assessment, but I know for certain that the other police's asssesment that elements of Jemaah Islamiah had infiltrated Pas is very real.

In fact, Pas leaders would not dare to deny this. The truth is, they themselves if given the opportunity would love to express open support for organisations such as JI which struggles to set-up the Dauliah Islamiah (Islamic country). They may not dare to say it for fear of losing votes but the setting up such a system of governance has and will always be their ultimate objective. They encourage their members to support such causes as that's the real appeal of being part of Pas as compared to Umno. Being with Pas, you are allowed to be on the extreme side of Islam. In Umno, they are mere moderates who are often accussed by Pas people of not being Islamic enough and at one point even branded as infidels.

Anyway, the link between some Pas members and JI operatives had been established way back even before the 911 attacks in New York in 2001.  Fugitive Malaysian AlQaeda suspect Zulkifli Abdul Khir @ Marwan, the once head of Kumpulan Militant Malaysia is a follower of JI Indonesian leader Abu Bakar Bashir. 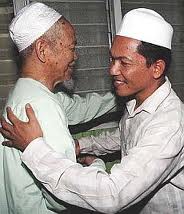 Nik Adli spend several years under ISA detention for his leadership of that organisation which was allegedly responsible for activities such as armed robberies, weapon smuggling and even murder. He was detained not long after 911 and released in 2006 (pic).

I had posted the story of his follower, Zulkifli Abdul Khir who is still on the run (regional security sources believe he survived an air raid several months ago by the Philipines armed forces which claimed to have killed him).


Nik Aziz may still hold a grudge against the BN government for detaining his son under the ISA and as a result may had refused to agree with attempts to forge a cooperation between Pas and Umno. But I believe if Nik Adli was not detained after the 911 terror atttack in the US, he would probably be killed by now or detained at Guantanamo Bay or still be on the run like Zulkifli.

Kit Siang should learn from all these and stop being paranoid of the police when they said there are communist elements within DAP. The possibility are real. He could do better if he had said that the DAP leadership would cooperate with the police in weeding out these communist elements from his party. But he didn't. Have you all ever wonder why?

My guess is that he can't even afford  to acknowledge the possibility that the police may had been right about the existence of the communist elements. DAP will lose a lot of votes. Since all that matters now for politicians like Kit Siang is winning the coming general election, the security of this country would simply have to take the back seat for them.