I haven't been exactly inspired to write as I am strangely bereft of opinions lately although I have been keeping up with current issues.

The following are issues which are at the top of my most recent "keep up-to-date with" list.

Water, water .. where art thou? Water rationing throughout Selangor - what a bummer; I live in Klang Valley now and this matter is very, very important to me as I am not going to do without water every 2 days.

Now suddenly we are seeing MOUs being signed, when we are already at a stage where water distribution state-wide is being rationed.

Although the shortage is compounded by drought, this matter could have been addressed a lot earlier had our politicians not been so focused on the politics of GE13 that water becomes a pawn in their political games.

We are now suffering the consequences of our politicians habit of politicising everything.

The reason why this is still on my keep-up-to-date list is because for some strange reason, the proponents of the issue seems to be absolutely dense and intractable about the matter.

I am not particularly interested anymore about all the reasoning, the explanations, the justifications and what-nots - it has all been said before and unless one is particularly dense, any reasonable and thinking human being would have figured out an acceptable solution.

I, however, find it absolutely fascinating how people who claim to be super educated to be such super uneducated when it comes to the national language, Bahasa Malaysia, even though they claim to be of Bangsa Malaysia, and they seem to be okay with that.

I am, however, convinced, that the problem is simply a mistranslation of a single word - either unintentional or by design, I will not delve into that possibility - and the absolute refusal of people to accept that mistake, for whatever reason, find an acceptable solution and move on.

Seriously, national reconciliation seems to mean different things to different people.  I think my views are in sync with that of Annie's and SatD's so I am not going into detail about that matter.

My question is, how can we even reconcile anything when the same phrase means different things to different people?

What is it about these people who are just unable to use simple language when addressing the public?

Not every rakyat is an English literary genius who goes to Oxford and read The Republican as a hobby.

Even those super educated libertarians or libertines, or whatchamacallit may not fully understand what was meant by the big "National Reconciliation Plan" that was being talked about all over the place as THE solution to all our woes (okay, so I may be exaggerating a bit here).

Maybe the first step in the big "National Reconciliation Plan" thingy is to actually agree on a set of Terms of Reference constructed in simple language that is understandable and acceptable to everyone - if you insist on using English, it is actually a rather straightforward and simple language.

Or maybe we should just stop the habit of using big words to impress people, or to cover our own lack of depth, when we don't really know what they actually mean to avoid future "mistranslation" problems.

Okay, this one is not strictly something that I intentionally wish to be up-dated on, but how can you possibly avoid this issue when Queenie and his merry men keep on creating issues just so that they can be in the news?

However, reading about them actually got me to some interesting stuff like this particular thing Yahoo! Singapore reported on.

You hear that, DS Najib?

In straight words, you have been urged to grow a spine and start using advisers who are not just of the "classy" types but ones endowed with some intellect.

Back to the topic of Kajang, although I still think BN should not get involved in an exercise that I can only term as a complete waste of public funds, I must say however, that DP Chew is just the right candidate to pit against Queenie in Kajang, just to show them what a total washout he is when compared to a real, down-to-earth, principled person.

What racism is really about .. 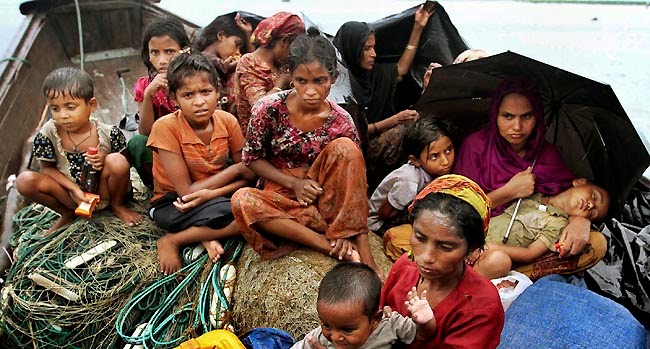 For those so called super educated Bangsa Malaysia who enjoy shouting at the top of their lungs about THEIR definition of what being persecuted is, they should go and read up about the Rohingyas, the ultimate definition of what it means to be a persecuted minority in this day and age - so close to home.

They have been persecuted for so long by all the different Myanmar (or Burmese) administrations regardless of civilian or military.

Their situation have gone under the radar of the international community who spent their precious commentaries on the persecution of Aung San Suu Kyi by the military government at the expense of the Rohingyas.

Once in mainstream politics again, she didn't do anything for them either.

I personally think that their plight are not getting enough attention from the so-called persecuted minorities in Malaysia.

That's the reason why these persecuted minorities have the leisure to whine about their being persecuted while having coffee at Old Town or whatever the current in trend spots they like to hangout at nowadays.
Posted by BIGCAT at 11:48 2 comments: