Reacting to bullies and liars

I received something on my WhatsApp this afternoon that got me a bit upset.

I feel it was only right that I should put it up here, just in case there are those who read stuff here may be affected by it in some way. 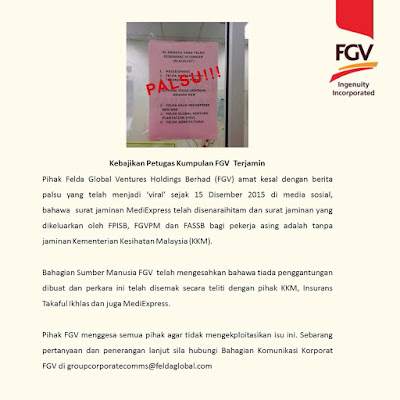 The Mole reported about it here.

With the recent allegation by some foreign "news" outlet that Felda plantations not only hired illegals but mistreated them too, I see this as the latest move to attack FGV and all that is related to Felda.

I am not really sure why anyone would actually go to the extent of spreading false "reports" that affect the well-being of others, other than that they are really sick.

Neither do I get why anyone would willingly be a part of this scheme to paint FGV and Felda as an evil organisation hell-bent on abusing their foreign workers, to the extent that they would lie about something like this.

But I have always been for the underdog.

One of the attractions of living in Malaysia is the abundance of places to go to and its relatively close proximity to some the most exotic holiday destinations in the world.

For the past couple of decades, ASEAN countries have been competing with each other and the rest of the world for the limited amount of FDI to fuel their economic development even as trade continues to grow among member nations.

This group of nations have such potential within itself to collectively become economically stronger and self-sufficient, if only they can overcome the barriers to greater cooperation which included socio-political differences and geographical barriers that have formed natural boundaries.

That was probably why the leaders of ASEAN have been working extremely hard to make the establishment of the ASEAN Economic Community (AEC), a single regional market for goods and services, a reality.

Collectively, AEC is itself a huge market of USD2.6 trillion with over 622 million people and the third largest economy in Asia, seventh in the world.

One of the most important aspect of building a single ASEAN economic community is probably in creating an integrated and cohesive international transportation network that allows for seamless cross border connectivity of people, goods and services while at the same time maintain a semblance of national sovereignty over their territories.

More challenging will be the effort to apply a standard set of laws and regulations across member nations, where physical mobility is the least of the problems or language and cultural differences are obviously not barriers to trade at the borders.

At the 21st ASEAN Transport Ministers' Meeting, the decision was made by member nations to adopt the Kuala Lumpur Transport Strategic Plan (KLTSP), also known as the ASEAN Strategic Transport Plan 2016 - 2025.

Coupled with improved transport facilitation, the objective of the KLTSP is not only to benefit international trade within the region but will also enable member nations to tap new avenues for growth and deeper economic cooperation.

The liberalisation of air services, or what is more popularly known as "open skies" is another progression towards creating a single and unified aviation market in the region and eventually this progression will encompass land and maritime markets as well.

The envisioned end result is greater connectivity, efficiency, integration, safety and sustainability of transportation networks in ASEAN, to serve as one of the foundation blocks of building an ASEAN economic community that can leverage their collective strength for continued and sustainable growth.