A little warning to Irda

Well, since I am still in a foul mood over the Kulim appointments - today, I would like to bitch a bit about what is happening in the Iskandar Regional Development Authority (Irda).

For those who are from planet Pluto, this is Irda's profile which I took from Wikipedia (Irda's website is so canggih that I can't cut and paste from it) -
Iskandar Regional Development Authority (IRDA) (Malay: Pihak Berkuasa Pembangunan Wilayah Iskandar) is the body responsible for the direction, policies and strategies in relation to development within the Iskandar Malaysia, having regard to the general framework of national and Johor State policies. Pursuant to this responsibility, IRDA will assist the State Planning Committee (SPC) and relevant local planning authorities to co-ordinate development, and for this purpose IRDA will adopt a Comprehensive Development Plan (CDP) for use by such local planning authorities.

Ok, Irda had since its inception almost five years ago went through three CEOs. The previous two had to leave mostly over difficulties they faced in handling issues related to their main stake holders - the local population of Iskandar Malaysia. These issues are (don't laugh ya) actually simple stuff - squatters relocation, public housing, public transport , contract allocations among local contractors etc etc. Simple as they may be, their solutions are hard to implement, because they deal with human existence. After all, managing public perception is a bitch, no? 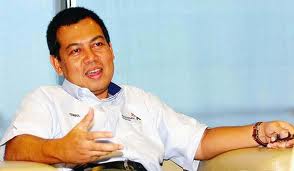 The current CEO, Ismail Ibrahim. took over from his predecessor Harun Johari early last year. It was said that he got the job because he is a grassroot man....ok ok, some of you who are in the know are already sniggering....but, do bear with me.

The truth is, I have been itching to write about Irda for quite a while now. I resisted the temptation because I do not want to give Johor MB Datuk Abdul Ghani Othman additional headache as the GE is just around the corner. Ghani and PM DS Najib Razak are joint-chairman of Irda. However, after much thoughts, combined with my foul mood now, I think I better write about it now so that whatever is wrong with Irda could be fixed before it can become a liability to BN's effort to defend Johor in the election.

I will not however be too harsh on them here as I do not want this posting to be intepreted as an attempt to discredit the BN-led State government. These are just small criticisms which I feel need to be urgently addressed so that Irda cannot be used by the Pakatan people as a bullet to hit BN in the run-up to the GE.

Let us start with Irda's recent decision to hire the UK-based Oxford Group Consultant which was supposed to use its "strong networking" to promote Iskandar Malaysia at world level. The whole thing went to nothing and from what I learned, Irda lost quite a huge sum in the deal. Please ya Ismail - that one, if it is true, is tax payers' money being burnt there. There are many other similar cases such as this, but let me just leave the one stated above as a reminder that people know what is happening at the decision making level of Irda and it should not be repeated in the future

Ismail also need to clarify on an allegation that one of his closest aides is running around posing herself as the decision maker on matters such as termination of staff's contract, 24-hours notice sacking of staff, promotion, bonus allocation etc etc. She had allegedly been going around issuing threats to Irda staff who refused to kow tow to her.

Mail, you cannot have this kind of aides, behaving as if Irda is their parents' company. I can name names here if I want but I am holding my punches for I do not want to make this worse than it is. Do you know that the whole thing is making Irda people who really want to work be very demoralised? It may even turn them (some are real BN supporters, unlike your aides) into moles of the Pakatan people. The end result could be very disasterous to BN.

Irda also need to do something to repair its relation with State government agencies. It could be observed that not many of those from these agencies turned up at Irda's recent Hari Raya Open House function in Persada. The absence of almost all head of local governments within Iskandar Malaysia at the function was very glaring, indicating everything are not well between Irda and them.

Mail, tell your people they need to get off their high horses and be more friendly to all those people. I know, Irda people are very well paid and those State agencies people are paupers compared to them. But, come on la, you all have to work together if Iskandar Malaysia is to be a success. How many times do you all need to be reminded that the main stakeholders of Iskandar Malaysia are the locals. If they hate you, then the whole thing will backfire to the BN government. Is that what you and your aides want?

Oh, Mail, also tell your staff not to be too shy with the orang kampung too.  Especially, that corporate comm head of yours. Tell her it is not nice la spending most of her time in KL. She need to make more engagements with the locals la. I know its not so glamourous to deal with the pakcik and makcik but thats her job isn't it? Seriously, I do not even know her name. All I know is that whenever she is in JB, she will stay at that luxurious Thistle Hotel. Why she is so rich one?

Ok lah. Enough of it for now.  Mail, you try settle those small issues first. I want to see whether you can or cannot. You don't fix those, I will come and kacau you again. Don't wait till the GE is too near ya. A lot of hot electoral seats are in your area.
Posted by BIGCAT at 13:29