So, that bunch of lousy people are back in Pengerang.

Ok, I admit that I was beaten to that story behind my backyard in Johor by those two senior bloggers.

Well, actually I know about the story but didn't deem it important enough to warrant an immediate posting.

It was probably the too much ketupat and rendang which made me a bit slow in the brain.

Anyway, I had first posted about the Pakatan's plot for Pengerang as early as February at Cooking Lynas-style nonsense for Pengerang

Yes, they tried several times to cause troubles for the project but after a few pathetic attempts and the Johor government's effective counter measures, I really thought that they had all packed off and admit defeat.

As it turned out, they are now back in Pengerang. Maybe their foreign financiers had pumped in more cash to extend their campaign there. Everyone may had noticed by now that the Pakatan's attack on the Pengerang petroleum hub project is spearheaded by Malaysiakini which is heavily funded from outside the country.

Their campaign this time around centered on the relocation of Chinese graves in the area. Now, if that is not pathetically desperate, I don't know what to say la. Using the dead to gain political mileage is as despicable as it can get. Of course the main aim here other then to sabotage the project was obviously to incite the Chinese, especially those who are going to vote in Johor to vote for them in anger.

By the way, not much problem it seems when it comes to the relocation plans of
muslim graves.

What happened was, during a recent meeting between the developer, State government's officials and residents of Pengerang, a bunch of people who were mostly from outside the area turned up and made so much noise over the graves relocation issue. They simply do not want to listen to the explanations by the officials. Well, you know, it was really that pasar borong kinda behavior, if you know what I mean. Later on I found out that these people are "weekend villagers" who come down to Pengerang once in a while to lepak there. The majority of the local Chinese folks there are actually quite ok with the whole thing and are reasonable people.

Relocation of graves for development projects is actually quite common. The latest in Johor which I can remember was when Iskandar Investment Bhd (IIB) relocated the graves at Pendas Laut as part of the relocation of the villagers there.  It was done efficiently and without much fuss. There were several Chinese graves involved in that exercise. Well, no Pakatan people turned up there to cause trouble. Probably  because the project was not big enough for them to exploit to win more votes.

Anyway, the Johor government had handled such things before and I think they know what to do with the situation in Pengerang now. Sorry ya Pakatan people, there is going to be no Lynas-style nonsense in Pengerang. Of course unless you all want the whole thing about the Chinese graves to really become a racial issue. Do you all really want it to be that?

By the way. what is it with these urban anti-development types that politicize other people's futures for their own little gains?  The PIPC development in Pengerang has such huge potential of bringing in high value jobs and business opportunities to Pengerang.  Smart local boys need not go elsewhere to find decent paying jobs, while not so smart ones will get to see their neighbors doing well and will aspire to do well too. 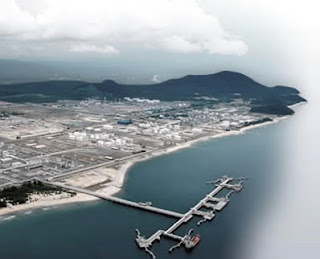 There will be spin-off businesses that benefit local service providers such as laundry, cleaning, hospitality, catering, etc. Local farmers can get extra income by providing produce to the local catering businesses, while local fishermen can earn extra income from high-spending hobbyists during their weekend fishing trips.  Then there is the assistance by the state for these people to start something new, extra, etc.

There are so many complaints by these perasan pandai types about Malaysia being left behind la, not being as good as Singapore la, yada, yada, yada.  Non-stop complaining, and yet these are the very same people who protest against big development projects that will catapult Malaysia into a regional hub comparable to Singapore's Jurong complex, if not better.  You prefer Pengerang folks to continue going to work in Jurong as opposed to working nearer to home ke?

Seriously la, don't you urban anti-development activists feel kesian for these local folks?  Why must you block their chance to improve their household income nearer to home?  Why won't you hold a civilized and constructive dialogue with the state planners and ensure the project will truly benefit locals and the nation as a whole?  Why la so small-minded, ha, you anti-development urbanites?
Posted by BIGCAT at 06:19