I am convinced these PKR people have no conscience at all when it comes to playing out their drama and of course their Drama Queen Supreme have to be the star at all times.

Seriously, I am so very tired of this Queenie in particular .. a couple of weeks ago accusing Japan of kow-towing to Malaysian dictates to bar him from entering that country, now someone who was elected by the rakyat to represent them in Kajang resigned to make way for him, next there's going to be a totally unnecessary by-election.

What?  You think election is just a game, and that we are all kids in secondary school suka-suka choosing a new class councillor to represent us at the School Council or something ke?

Sadly, I am convinced the people of Kajang will choose PKR over BN again, just as the people of Permatang Pauh chose Drama Queen Supreme over BN not so long ago, again in a drama very similar to this one - that time his wife resigning to give way for him.

It is obvious that he is doing this not only to keep himself in the limelight, but also to create a continuous and never ending drama, a Malaysian Sinetron or a Malaysian Soap Opera, that will become his platform to maintain the anti-government momentum until the next GE.

Mr Queenie, I have a request, can or not?  Can we have a new scriptwriter?  This extended drama is becoming too repetitive and predictable that maybe a new writer would be able to make it work until the next GE.

As it is, I am finding it difficult to be inspired to write about your performance, let alone that of your supporting actors.  Too comical, it isn't even funny anymore.

I mean, if you want us to be interested enough to write about your antics, you should at least be entertaining - and I don't mean a comical kind of entertaining like that thing you did accusing the Japanese of denying you entry to their country at the behest of the Malaysian Government.

That was just too embarrassing for Malaysians - to have an Opposition Leader with so little grey matter.

It makes those who chose you as their Leader seems even more moronic and the rest of us implicated as well for allowing a person without sufficient cerebral activity to be so popular.

Anyways, you should know by now that a single by-election isn't dramatic enough - it's what we Malays call "biasa-biasa saja" - you should stage a nationwide multiple by-elections by inducing all the PKR assemblymen to resign en masse every six months.

That would almost be like a General Election - just make sure that you have enough PKR members to be candidates for the bi-annual mass resignations until the next GE.

Who knows, maybe more of those disappointed BN rejects who lost their bids to become candidates under BN would climb all over each other to join PKR instead of DAP as that would be their only chance to become assemblymen.

Now that would be a mega comedy indeed.  Just imagining it is making me laugh .. hahaha .. 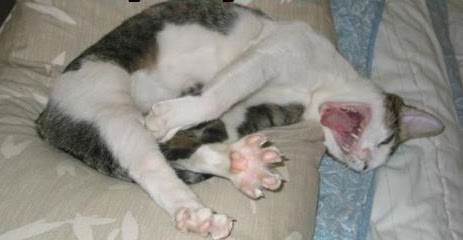