I have concluded that Malaysians are now super liberated that we can step on everyone else's sensitivities with no fear of repercussions.

Except for the Muslims and Malays not categorised as Pakatan supporters, of course, as they are not allowed to have any cultural or religious sensitivities, nor entitled to have rights to voice their opinions or make decisions.

Only the liberated Malays and Muslims of the Pakatan have those rights.

Any decision made by the Malays and Muslims must be judged as guilty of discriminating the minorities, before any investigation is done, and this guilt must be broadcast through all the social networks and discussed in all forums too, while calls must immediately be made to sack, imprison and punish someone.

Because, Malays are largely racists who have since Independence Day harassed and persecuted the non-Malays in this country such that they can't earn a decent living, have insufficient education opportunities, can't practice their culture and religion in peace or speak in their native languages.

This is true because there are no rich and prosperous non-Malays in this country and those vernacular schools are just for show, they are actually being taught in Malay.

That's why in Malay schools (Malay is such a low-class thing that any school that uses that language cannot be considered a national school and must be termed as a Malay school), when pupils have their lunch in the changing rooms, it is a form of discrimination against the non-Malays regardless of the fact that everyone else eat there too.

The repressive Umno led government which has been in power since Independence that has led Malaysia into a state worse than third world countries (according to Pakatan politicians), is so evil that they must be toppled by any means.

Putting into power a sex-deviant as Head of the Nation is really to ensure a truly liberated nation.

We should have ex-convicts as ministers to champion the rights of criminals who are being persecuted by the sadistic police for just trying to make a living in their chosen career paths.

We should also appoint gangsters as security officers in place of the police, since they are already collecting protection money, so might as well empower them to protect the public as vigilantes.

And of course we should fully institutionalise all the groups championing all those new-fangled rights that currently exist as NGOs as fully funded government departments so they don't have to depend on foreign funds and obliged to fulfill foreign agenda.

And all the government officers must be sacked as they are largely Malays and Muslims, which of course make them corrupt and lazy, to be replaced by those dropout students such as that would-be teacher, whatever his name is, and that one who kicked a police officer who was already lying injured on the ground during the last Bersih violence.

We must also allow Muslim women to represent Malaysia in beauty pageants as prohibitions of Muslims from participating in such events by the Fatwa Council should be rescinded as liberal Muslim women knew that the reason Allah bless them with physical beauty is for it to be paraded in all their glory for all to see. 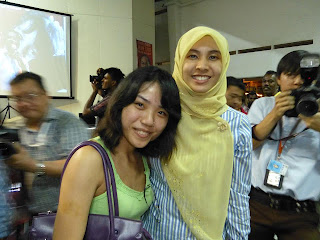 Their every move must become front page news for fully liberated newspapers, never mind that in western countries only trashy tabloids celebrate such people, for Malaysian media outlets must be seen as more liberated than their western counterparts.

If they denigrate other people's religious beliefs, we must find all excuses possible to exonerate them and explain it away as them just having a sense of humor, as apparently, only Malay Muslims are guilty of being bigots.

As the final step in creating a truly liberated Malaysian Malaysia, all those who voted Umno/BN in the GE13 should be exported to their countries of origin as they are not truly Malaysians, at least according to ABU.

If all these things happen, I would readily find somewhere else to call home as I truly can't abide such a repressive liberation that persecutes against my choices, beliefs and way of life.
Posted by BIGCAT at 08:24