Is she really a crook? 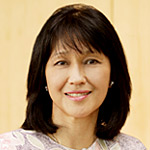 I have to admit that I know nuts about the financial market or the mechanism which control it. So when the Securities Commission or rather its chairman Zarinah Anwar came under relentless attack by bloggers and also the MSM over her husband's wheelings and dealings, I decided to do a bit of checking..It's now more than two weeks since the attack begins and it is yet to show any sign of abateing. Except for some obscure financial bloggers who defended her track record, Zarinah has been portrayed by all sides (pro-government and anti-government) as a really evil person in cohort with her husband in plundering the people's money.  Even Mat Sabu of the communist fame got more backers than her.

Are all the accusations against Zarinah true? Admittedly, I am not sure.

I tried to find out more about Zarinah and found that she has always been very professional since way back then when she was with the AG's Chamber, and also while with Shell Malaysia, before being asked by the then PM Tun Dr Mahathir Mohamad to bolster SC. Her performance at SC has been good. It was however later on tainted by the ECM Libra-Avenue Capital saga and the alleged Kenmark mishandling of journalists issue. She survived those but made a lot more enemies adding to the long list she already accumulated from her iron lady approach in handling the regulatory body.
As for now, I guess everyone have already made up their mind what they think of Zarinah, thus I was rather more inclined to find out more the human interest side of her story. Unfortunately, I can't find much as she is not the fame-seeker type like her sister Zainah Anwar of Sisters in Islam.

This is her profile as given by the Malaysian Accounting Standard Board :

Tan Sri Zarinah Anwar is the Chairman of the Securities Commission Malaysia (SC) since 1 April 2006.  She had served as the Deputy Chief Executive of the SC and member of the Commission since 1 December 2001.  Tan Sri Zarinah is also the Vice Chairman of the Emerging Markets Committee of IOSCO and represents the Committee on the International Financial Reporting Standards (IFRS) Foundation Monitoring Board.  Tan Sri Zarinah currently chairs the Malaysian Venture Capital Development Council (MVCDC) and the Capital Market Development Fund (CMDF).  She is also the Vice Chairman of the Asian Institute of Finance Malaysia (AIF).
In addition, Tan Sri Zarinah is a member of the Labuan Offshore Financial Services Authority (LOFSA), the Financial Reporting Foundation (FRF), Malaysia International Islamic Financial Centre (MIFC), and the board of directors of the Institut Integriti Malaysia (IIM).
Prior to joining the SC, Tan Sri Zarinah was the Deputy Chairman of Shell Malaysia.  She graduated with an LLB (Hons) from the University of Malaya.


The more interesting  nuggets I found out while searching about Zarinah was however the story about her family, in particular her father  Tan Sri Haji Anwar bin Abdul Malik, who was credited as the man who gave the United Malays National Organisation or UMNO its name – initially United Malays Organisation.
It was at a meeting in Batu Pahat when Anwar, considered to be one of  the seven Umno founders from Johor Baru met Datuk Onn Jaafar to call for a unification of all the Malay nationalist groups following the introduction of Malayan Union by the British.
Anwar was Datuk Onn’s private secretary when the later was Johor Menteri Besar.
Zarinah and her siblings also have familial ties with other prominent Umno families.
Zarinah's step-sister Marinah Anwar for instance has her daughter married to Mokhzani Mahathir. 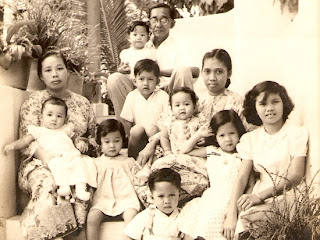 Family photo of Zarinah when she was a little girl. Guess who among the little girls is she? 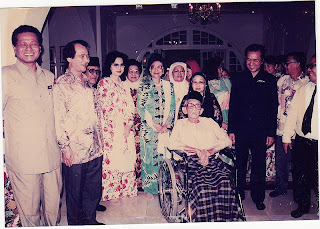 Zarinah's dad being feted by Umno leaders. The photo was taken at the residence of  Johor MB Datuk Abdul Ghani Othman who seems to look quite funny here. The guy standing next to the wheelchair need no introduction I think.
Zarinah in action on one of her better PR days.
Posted by BIGCAT at 14:25