All Is Well At Medkom

Last night I had a chat with a friend who used to work for the Johor MB's Office and is now back in KL.

She told me that like me, she has decided to leave Johor and is looking for job opportunities here in KL now that her capabilities are no longer welcomed there because what was perceived as her affiliation to the previous administration.

However, she has quietly been keeping tabs on the fate of her team, whom she had been worrying over all the while.

Last night, though, she was kind of pleased as she was informed that the new Manager had given them six months to prove their worth instead of the previous uncompromising one month termination notice.

"At the very worst, they have at least six months respite to look for a new job, so I am happy for them.  Now I can sleep well again."

As for herself, she had no regrets, despite now facing an uncertain prospect of long-term unemployment.

When asked why she didn't start looking for a new job the moment Ghani was certain to retire from politics, she said that she had a job opportunity at the time, but decided to remain because she couldn't leave at a time when her services were still required by BN Johor.

So what happens now?

"I'm sure I can survive.  My conscience is clear, I didn't abandon my friends in their hour of need.  That's all that matters.  As for earning a living, I am sure I can find something soon.  Besides, I have some savings to tide me over until I find some source of regular income again."

PS:  I have storage! 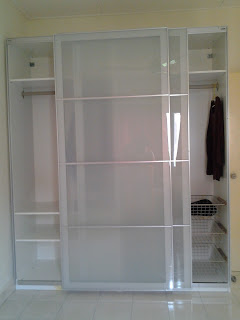