Romantic post-riot conversation (and a question to journalists)

GF : Why you never called me? Don't you know how worried I was? You ok or not?

BF : Aiya, you haaar...I didn't even go to the demo la. Why you so ganchiong one?

GF : How would I know, I'm just worried, ok? Eh, can you be a bit nicer to me? Never call me for a few days, now still want to be garang with me. Do you know that you are being too much?

GF : Ok ok...at least you are safe....your friend never asked you to join him at the demo ka?

BF : Told you already, I'm not the type who waste time like that.

GF : Ya ya ya...
: Eh, I think the demo thing will backfire on Pakatan because of the rioting.

BF : You sure or not? It could be the other way around, ok? It's all over the internet that Bersih was a success and the riot was started by the police.

GF : Eh, there are videos and pictures of the rioters starting the violence, ok? Even got videos of them beating and kicking policemen.

BF : That's what you say. The Pakatan people are saying something else. They are now saying the police beat not only protesters but also reporters.

GF : Why would the police want to simply simply beat up reporters? They are crazy or what?  What would they gain by doing that? Must be that they mix it up between the reporters and rioters. The reporters wear their accreditation card or not? Do they themselves take part in the demo?

BF : How would I know. You asking me all these for what? Eh, can we talk about something else? I think you spend too much time reading all these political nonsense in the blogs.

*The conversation then went on for another half an hour, mostly discussing how to reduce weight and why Chinese girls love to eat pork knuckles.

** By the way, this guy in this picture is a journalist beaten up by rioters who were part of the Bersih 3.0 crowd on that day.  His name is Mohamad Azri Salleh. He works as a cameraman for TV AlHijrah. 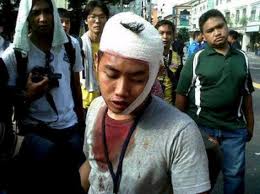